The 11th Fine Music Radio Bursary Trust Awards was held at the Baxter Concert Hall on 10 April 2019. This annual competition is open to music students in two categories, jazz and classical.

MC for the evening was FMR’s Station Manager Mark Jennings. After a short introduction, Jennings asked the audience to rise for a recorded performance of Nimrod from Elgar’s Enigma Variations. Jennings said, “Nimrod is traditionally played when someone associated with the orchestra has died. We are playing it tonight to honour the passing of three wonderful people who were all involved in the Fine Music Radio Bursary Trust Awards: Barbara Robinson, Victor Tichart and Leslie McKenzie, all of whom died within a few days of each other and all would have been here tonight. May you all rest in peace, and may the beautiful music you brought to us, now accompany you.” 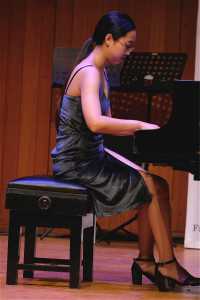 Mark then introduced the joyous part of the evening, the competition. Three jazz and classical finalists competed for the prestigious titles.

Jennings said, “I don’t envy any of the judges tonight. The standard is so high it’s going to be very tough to choose the winners. Fortunately the awards are structured to honour everyone who made it to the finals, and nobody goes home tonight empty handed.” 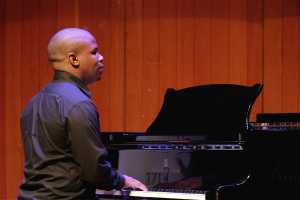 All three finalists in the jazz category were from the South African College of Music. The runners up were trumpeter Neo Mathebula and saxophonist Tshegofatso Matlou. The winner was pianist Lonwabo Mafani (pictured right).

The evening was the perfect platform to honour and celebrate both those that came before and those who will carry the musical torch forward.