This year the 9th Shakespeare School Festival South Africa (SSF SA) kicks off on 16 April 2019 and will be dedicated to Sonny Venkatrathnam who passed away on 15 March at the age of 84. 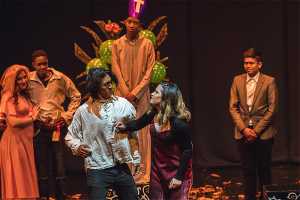 During his incarceration on Robben Island, Venkatrathnam, an apartheid freedom fighter, smuggled in a copy of The  Complete Works of Shakespeare, disguised it as a bible and passed it between a number of prisoners, including Nelson Mandela. Many of the inmates marked their favourite passages in the book and Mandela’s signature was found next to a quote from Julius Caesar: “Cowards die many times before their deaths, the valiant never taste of death but once.”  The festival will open with the play by Matthew Hahn entitled The Robben Island Shakespeare, performed by former Vista Nova High School learners and young actors from the Educasions group.

Strengthening the link between arts and education

The SSF SA is an education program aimed at improving language and social skills through the performing arts. It is Educape’s flagship initiative that was launched in 2010 by Kseniya Filinova-Bruton with the objective of strengthening the link between the arts and education. Since inception, the SSF SA has gone from 20 to 2000 participating youth and learners across the Western Cape, Gauteng, Kwa-Zulu Natal and the Eastern Cape.

Staging a Shakespeare play in a professional theatre is a challenge to be relished and the SSF SA is an ideal way for young people seeking to explore their potential in a fun, developmental way, simultaneously making their theatre debut on a professional stage in a non-competitive environment.

Schools get to prepare and perform 30-minute abridged versions of the plays and those taking part this year Western Cape schools are participating from all over the Western Cape Metropole and as far afield as Hermanus. 31 schools in total will be taking part in the SSF SA in Cape Town. Breakthrough performances last year came from the De La Bat School for the Deaf, using South African sign language (SASL), and the Pioneer School for the Visually Impaired, delivering ground breaking performances of Romeo and Juliet and Macbeth respectively. Both schools will performance again at the SSF.