The moral behind A Boarding Line is … when the captain in charge crash-lands an aircraft, he/she may not necessarily be demoted to that of serving flight passengers coffee.

It’s (also) just possible that the despised co-pilot may not replace you in the cockpit. So. hang on, life has a habit of walking its own path – not always the anticipated one. 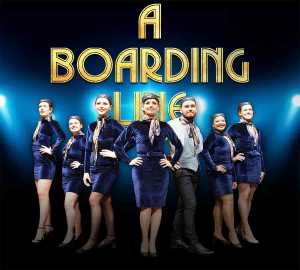 That’s where we meet a despondent Captain Jo Samuels, played by Regina Malan (Me and the Sky). She’s convinced her flying days are over. As the female captain responsible for the aircraft’s safety, she was placed on special leave after a serious incident.

We don’t actually learn what that incident was. But Emma, Jo’s friend and Head Stewardess (Sian Atterbury), the entire cabin crew, and airport staff, wholeheartedly support Captain Jo returning to her job (9 to 5).

Perhaps the exception is Check-In-Girl Julie played by Caldine Wyngaard (Almost There). Not quite so young, she feels life is whizzing by. So when co-pilot Billy Kodaly (Dudonne Diergaardt), shows more than a passing interest, (All I Care About is You/A Whole New World) she falls in love, until discovering he is a two timing so-and-so.

Billy, an Al Debbo-esque dreadlocked character is, by co-incidence, son to AWL Airways’ Chairman. A connection he plays to his advantage until he gets his just desserts (Grand Knowing You).

Amongst this strong cast particularly pleasurable was seeing and hearing the delightful Sian Atterbury. A long time G&S favourite, her charming soprano (You’ll Never Walk Alone) rings true, as does her empathy towards downhearted Jo.

Malan has a glorious voice. This she uses to maximise her emotional depth and her performance well deserves a nomination for an Amdram award… when amateur theatre starts flying again.

I’ve met Wyngaard, before. She’s indeed an accomplished triple threat actor whose vitality never fails to add value to any show in which she performs. I loved her calling Billy to task for being fickle.

Tam Hattingh is (to me) a welcome newcomer. She’s gracious, speaks clearly, moves gracefully.  Hopefully we see more of her.

Overall the crew’s warmth and happy energy receive my personal thanks for having brought life and laughter back into The Masque theatre. May other societies soon follow.

The Masque Theatre must never be allowed to die.