A Night at the Musicals is described as “a tortured love letter to the glorious genre of musical theatre,” performed by two drag artists. The hilarious send-up will have a run at the Theatre on the Bay in September/October 2019. 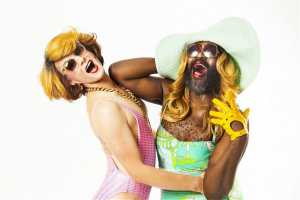 Dubbed the “Ebony and Ivory of drag” by the Australian press, the Olivier-winning star of La Clique and La Soirée, Le Gateau Chocolat and Queen of the Alternative Drag scene, Jonny Woo, will delight with hilarious hijinks and shady shenanigans as they ‘Les Misérmassacre’ all the musicals we know and love.

The duo adapt lyrics instead of simply singing the songs as they are, making them both comedic and politically relevant. They also put their own spin on how the songs are performed, adding riffs and key changes to suit their vocal ability. The duo have just been on a world tour with A Night at the Musicals.

From Gypsy to Grease, Annie to The Lion King – no show is safe!

What: A Night at the Musicals

Where and when: Theatre on the Bay from 17 September to 5 October 2019