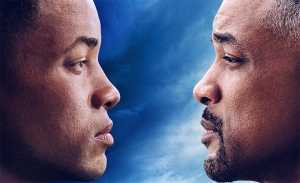 A high concept sci-fi plot gives way under the weight of tons of SFX to give us twice as much Will Smith as ever before.

Gemini Man’s very basic storyline is that assassin Henry Brogan is the best at what he does, but now his government is gunning for him, using his younger self to get rid of him. That is really all there is to it. Toss in the stock standard spook bosses with their doublespeak and careless morality, Benedict Wong as a useful sidekick and set it in the unpopulated back streets of Cartagena and Budapest and we’re good to go.

Blink while watching the film and you’re in another country. But, no matter how careful Henry is, his twin shadow is not far behind with even better guns and more energy for killing.

In the canon of Will Smith’s work this will count as a contemporary version of After Earth, except now it is Mike Lowry squaring off against Fresh Prince of Bel Air. The trailer told us as much and it is the reason we want to watch the film.  Who doesn’t want twice the amount of funny one-liners and pithy comebacks? Who doesn’t like some well-choreographed OTT action sequences?

Did you yell moer hom met daai bike when you saw the trailer? Well, then this film is for you. If however you were attracted to the tagline that this is a film from the visionary director of Life of Pi, this is not for you.

At no point do you begin to care about any of the characters who never become all that emotionally invested in each other either. Every bit of emotional interplay that might be happening is referenced in dialogue and the score does nothing to speed up or slow down action or add emotional heft.

There are no long tracking shots, everything is either shoddily edited jump cuts or basic back and forth tracking between talking heads. For all that, the action sequences are frenetic and the story plods along as we know it must because we watched all the 90s sci-fi action films about this very idea.

A secret government programme to create elite soldiers met Dolly the sheep ages ago and we have been watching more clever versions of this on the small and big screen for decades.

While the ethics of cloning get briefly touched on in one scene, the film is really just a vehicle for Smith to beat himself up. And, really that is the point.

Just as Liam Neeson got reinvented as an action hero in his 50s, Smith can now do the same because there is a huge loyal fanbase the globe over who love him as Mike Lowry, but avoid him when he tries to be original.

Keeping up with the Kardashians Season 18