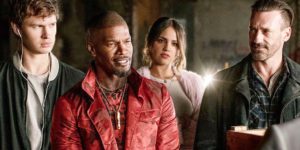 Joe Wright’s Baby Driver is a heist movie for a generation who grew up playing Grand Theft Auto.

He skillfully mines all the tricks of successful heist movies and throws in a pumping soundtrack that actually forms part of the plot.

Gritty car chase sequences are well-choreographed and slightly OTT, just impossible enough to keep you on the edge of your seat but not so much that you roll your eyes. Even when the violence becomes gratuitous, there are moments of redemption where characters “do the right thing”.

The visual style is distinctive, with camera angles and framing suggestive of, if not a comic book, at least a video game you played at some point.

Ratcheting up the tension as the stakes get higher, Wright offers up more detail every time his titular character sets off on another heist.

Ansel Egort plays Baby, a getaway driver with an impeccable record. Paying off a debt to crime boss Doc (Spacey), he does as he is told until he meets the woman of his dreams who gives him a reason to want out. Lily James smiles sweetly and comes through at the right moment as Deborah.

The music is important because Baby is constantly listening to his iPod to distract from chronic tinnitus, and his love of making music becomes an important plot device.

Foxx menaces as a manic, amoral Batts; Hamm and González charm as Bonnie-and-Clyde-like Buddy and Darling; and Spacey is cold and controlling as Doc. Their characters provide unexpected insight into the Baby character. All action is driven by their relationship to the young man but for the most part Egort keeps his character aloof and unengaged. Except for this idea he has of who Deborah could be to him, and, or when he is behind the wheel and choosing a song to inspire his driving.

It is silly and flashy and shiny and moves fast, and anyone who loved the first Fast and Furious movie will love this – especially if you prefer that first movie over all the rest.

The film is not going to give you some great insight into the condition of man, but it is going to get you walking out the cinema with the urge to burn some rubber.