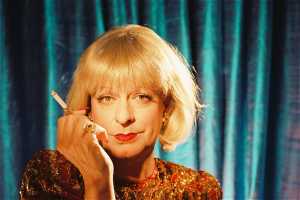 Bambi Kellermann, sister to the (more famous) Evita Bezuidenhout, has a show at the Fugard from 24 March 2020 titled Never too Naked. In a frank Q and A session, she talks about her life, love, loss and longing. With laughter, of course.

Q: Let’s start with the question you said was embargoed: when last did you see your sister?

Bambi Kellermann: Since I returned to South Africa in 1995, I have seen her once. That was in 2015 when we thought our mother was on her deathbed. We only then realised that it was her way of getting her two daughters together. I immediately left without saying anything to anyone. So that was four years ago. We haven’t spoken since the mid-1980s. That all sounds terribly depressing.

Q: When reconciliation is the catchword in our democracy, can’t you two sisters lead by example?

Bambi Kellermann: You are so right. Reconciliation starts at home. I hope in the year ahead to speak to her. As someone said to me: do it soon, because one day you will be in the same room together, but one of you will be in a box. Believe me, if my sister was in the box and I walked into the room, she would get up and walk out!

Q: Is there anything you both agree on?

Bambi Kellermann: Yes, that our mother Ouma Ossewania Kakebenia Poggenpoel is a vampire and will never die! Ouma Ossewania is … dare I speculate: 116 years old? They say Prime Minister Hendrik Verwoerd kissed her hand at the Republic Celebrations of 1961 and he nibbled her. Maybe he was a vampire too?

Q: For those of us who have heard about you but don’t know you, who is Bambi Kellermann?

Bambi Kellermann: I was born in Bethlehem in the Orange Free State in 1938 as Bayby Poggenpoel. My sister Evangelie Poggenpeol is the person you all now know as Evita Bezuidenhout. I left South Africa as a teenager and went to Vienna in Austria. I started stripping in a nightclub. I married an older man and became a Countess. He turned out to be a Nazi. I ran way to Hamburg and became a star on the Reperbahn. My life became a rollercoaster of ups and downs. Let’s just say if you find me on Wikipedia you will read that Bambi Kellermann was one of the grand horizontals of the Northern Hemisphere.

Q: Your new show? Never Too Naked? Really? An 80 year old woman without clothes on stage?

Bambi Kellermann: Oh my goodness no! I would never be naked on stage in South Africa at the pathetic prices they charge for tickets. Ridiculous! No, I tell what I call my bedtime stories about life, love, loss and longing. With laughter, the best medicine.

Bambi Kellermann: Isn’t it about time someone did? Sex unites us all. It’s the picnic in the minefield of life. I chose it, because I refuse to be manipulated by men. So the language of sex was an international way to stay safe and secure. Men are funny old things: they just want to be loved and then they leave a fortune on the table. Anyway, I think I owe it to the youth to warn them about the dangers of being sexually naïve and far too trustworthy in relationships.

Q: Would you agree that to some people you are politically-incorrect?

BK: I sincerely hope so. Political correctness doesn’t really make sense to me. When was politics ever correct? I want to rattle everyone’s political cage so that people rethink their prejudice. And let’s face it, sex can also be very funny. Rather laugh at my stories, than giggle at a nervous naked husband. Now that’s no way to start a family.

Q: How would you talk to your children about sex?

BK: I don’t have children, so I try and have conversations with young people without sounding like an old lady wagging a finger from her moral high ground. I firmly believe parents need to be the only people to talk sex to their children. Sadly too few do. There is also too much reliance on the internet and googling sex can only lead to trouble. There is no condom available on social media; just the magic words: delete and switch off.

Q: You say holidays are the most dangerous times for young people. What do you mean?

Q: Share with us some of the highlights in your life (and remember there are also children in the room!)

BK: I regard every day spent on this planet that ends with my life intact and a smile on my face as being a highlight. I suppose the biggest thrill was meeting US President John F. Kennedy. And also once Marilyn Monroe, but not together! I was also the part-time char in Paris for Marlene Dietrich and had to serve tea and cake to Maria Callas when she visited. A highlight in the future will be the knowledge that South Africa’s sex workers will also be protected by our Constitution. They need a union; they need health treatment without prejudice; they need protection within the law. And they need to be allowed to strike and also be expected to pay tax. Sadly the one might not lead to the other.

Q: So are you an optimist? In spite of a life well-lived?

BK: The mere fact that I am still here at my age, after my lifestyle, in spite of the ups and downs makes me optimistic that life is there to be enjoyed and shared with those who care. Don’t waste your time on rubbish. Life’s too short.

Q: I am sure Mrs Bezuidenhout will read this page. Do you have a message for her?

BK: Liewe sussie, if you promise not to set the Darling police on me, I would like to have a rooibos tea with you at Evita se Perron one morning. Your koeksisters will be optional.

What: Bambi Kellermann: Never Too Naked

Additional: Never Too Naked will also be at Woordfees on 11 March 2020 at 8.30pm with booking through Computicket