Survival is the alpha-omega of this show’s theme, and predictably the one-hander features conservation, the ecology, respect for the environment, and empathy with life in the bush, all of which are evident in the set and costumes no less than in the text. But the latter uses these issues to explore, with devastating irony and dollops of vulgarity, the shortcomings of human nature in collision with mother nature. On occasion it departs altogether from its anchor topic to introduce straightforward satire of human frailty; the result is both entertaining and thought-provoking.

Ben Voss, who impersonates Benny, is a big man in a small venue, and the use of amplification is questionable since his strong stage presence and proximity to the audience would have more than sufficed to communicate effectively with his listeners. That said, the personality he delivers is fully rounded, convincing, and generally likeable. Janice Honeyman’s direction keeps excesses more or less in check.

The real gem of the show is a portrait gallery of individuals portrayed in the course of Voss’s extended monologue. These cameos include the Bushwhacker’s Granny, his inept headmaster, a brain-dead policeman, a coarse-grained German game lodge owner, a Constantia housewife of mind-blowing shallowness, a ferocious chicken farmer and – best of all – a 17-year-old youth addicted to technology. Amongst others too numerous to mention. Every now and again the name of Brenda is mentioned with a frisson of dread. She is Benny’s ex-wife and a female of terrifying and volatile temperament, another challenge to his survival… The humour is broad, seldom subtle, and verges on caricature to convey the message. 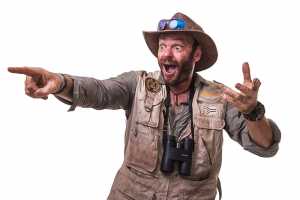 Makes you think even as you chuckle …

A low point of the show is an excursion into bush cuisine as Benny demonstrates the art of cooking a corn-cob, with heavy reliance on scatology. The exercise culminates in washing the whole thing down with a refreshing glass of urine, newly excreted, and if a point is being made here, it is drowned (literally) in overwhelming disgust inspired by the sketch’s finale.

Apart from the impressive mimicry mustered by Voss as he presents the wide range of people featured in this show, what makes the evening worthwhile is the intelligence with which John van Ruit’s text exposes clichés surrounding society’s so-called care for the environment, encapsulated in, for example, a housewife’s obsession with bio-degradable disposal of a stray snake she orders her servant to hack to death. Makes you think even as you chuckle… This is not for the squeamish, but its entertainment value is undeniable.