The South Africa-meets-Bollywood film, Bhai’s Café, was filmed entirely on location in Cape Town and opens on 14 February 2020, after successful festival showcases at the Durban International Film Festival as well as the recent Joburg Film Festival last year. 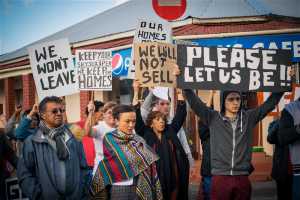 The 99-minute film is filled with drama, romance and good humour. It is produced by Razia Rawoot and Maynard Kraak, who also serves as director. Bhai’s Cafe focuses on “family, urban gentrification and romance with a Bollywood touch”.

The film sees Bollywood comes to Wynberg, as a cornerstone of the community – the local café owned by Bhai – comes under threat from a ruthless property developer. At the same time Bhai’s daughter is swept off her feet by the property magnate’s son in true Bollywood fashion, setting up a battle of epic comic proportions as Bhai rallies the community to save the cafe, the neighbourhood and a blossoming love affair.

Actor and comedian Siv Ngesi plays the lead role of male love interest Patrick. His character is incidentally a fan of Bollywood movies and music, and participates in multiple dance sequences and even sings in Hindi.

The screenplay was written by Darron Meyer and Aaron Naidoo, based on a story by Rawoot and her husband, Executive Producer and actor Mehboob Bawa, who describes the film as whom this film is “a labour of love”.

Where: Selected cinemas in South Africa from 14 February 2020