Trumpeter Blackie Tempi from Gugulethu will be featured in a live stream concert as part of the Jazz in the Native Yards series on Sunday 11 October 2020 from 7pm. 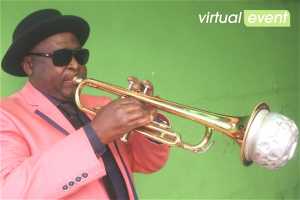 Together they will blend rhythmic African music with influences from Tempi’s big band Tandanani, his quintet Brotherhood, and the music of Winston Mankunku and Errol Dyer. Basically, the stuff of legends.

Tempi left school after the June 16 Soweto uprisings. A self-taught musician, he started playing trumpet and flugelhorn in 1977. He furthered his studies in jazz workshops and started his own band Fever in 1982. In 1995 he toured Namibia with his eight-piece band Tandanani. In 2000 he created the five-piece band, Brotherhood with George Werner on piano, Wesley Rustin on bass and Babs Ndamase on drums.

Lonwabo Diba Mafani started playing piano at the age of sixteen. In 2014 he was selected as the pianist for the Standard Bank National Big Band directed by Brian Thusi and was re-selected in 2015 under the leadership of Mark Fransman. He has performed with the likes of Lulama Gaulana, Hugh Masekela, Kingsley Buitendag, Chris Thorpe, Sakhile Simani and Gareth Walwyn. Mafani is studying jazz performance at UCT.

Duncan Johnson learned to play multiple instruments in high school such as guitar, bass guitar, and piano. In 2011 he picked up the alto saxophone for the first time and fell in love with it. He started his studies at the University of Cape Town as a tenor saxophone player, with Jazz Composition and Arrangement in 2014. He is now a full-time musician, composer, and arranger who has a huge love for Cape Jazz and the classics created by the likes of Stan Getz, Dexter Gordon, Coltrane and Miles Davis.

What: Blackie Tempi: Jazz in the Native Yards