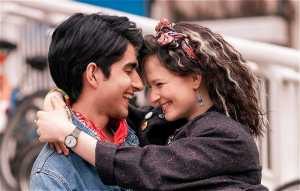 I snuck out of Cinema 1 at the Labia this afternoon and made my way straight to the bathroom where I had to wash my face and put drops in my eyes from pretty much weeping from the moment the first Springsteen track started in Blinded By The Light, and then crying all the way to the end. That’s about 1.5 hours of crying. But it’s the best kind; the kind that leaves you in love with the world, and with the irritating, loud women who sat behind us who only stopped talking to sing all the lyrics to all the songs, which is what I did too.

Blinded By the Light is set in Luton in 1987 and it’s about a teenage Muslim boy of Pakistani heritage, who is introduced to Bruce Springsteen by his high school friend and he discovers that The Boss sings directly to his life, his frustrations, his family troubles, and his desperate desire to get out of a Thatcher ravaged, small, depressed English town.

It portrays his family and their struggles, the political temperature, the economic misery, the racism, the eighties!, bangra, a girlfriend with a political conscience (even though she dresses like Madonna in Desperately Seeking Susan, and me, in 1987), all seen through the eyes of a wannabe writer whose father sees his passion as a hobby.

And it is all the feels. It is sentimental, brilliantly styled, heart wrenching, funny and totally, completely accessible, especially if you, like me, are a Bruce fanatic, and know all the words, and feel all the things. Also, it is totally based on a true story. It is based on journalist Manzoor’s memoir Greetings from Bury Park: Race, Religion and Rock N’ Roll.

Not gonna lie. This script is pretty trite. But. It is based on a true story! The acting is not going to win any Oscars. Who cares? I was moved and swept up and delighted. If you aren’t a Springsteen fan it might not be as fun (there was a young person on her phone in front of us for the duration), but for me, it was perfect. I was Blinded By the Light.

Each Springsteen song, and bit of quoted Springsteen lyric was an emotional trigger for me. All the father stuff, all the working-class political stuff, all the first love, tramps like us, high school rebellion, poetry writing was my story too, just a little earlier and in a bloody Apartheid South Africa. Still. Blinded By the Light felt like it had been written for me; just like each word of each song on each album. And I know for sure I am not alone.

What: Blinded by the Light

Where and when: Labia Cinema, August 2019