DES is a true-crime drama focusing on one of the most infamous serial killers in UK history – Dennis Nilsen. DANIEL MAYS plays Detective Chief Inspector Peter Jay in the BritBox series. He talks about this thrilling crime drama and his character.

Referred to as the ‘kindly killer’, Nilsen was a civil servant who spent five years murdering boys and young men he met on the streets of London from 1978 to 1983. He would meet and befriend them before offering them food or lodgings at his North London flat. His victims were often homeless or living off-grid, having slipped through the cracks of 1980s society and welcomed this  stranger’s apparent generosity. When he was finally caught on 9 February 1983, Nilsen had murdered 15 men over five years – making him Britain’s most prolific serial killer of the time.

DES started streaming on BritBox on 7 October 2021, and is told through the prism of three isolated men – a detective, a biographer, and Nilsen himself.

Tell us the story of Des

“Dennis Nilsen is probably one of the most notorious serial killers this country has ever produced. It was in  983 when he was first arrested, but he had been killing young men over a five-year period and wasn’t caught. He killed men at his Cranley Gardens flat and in another property before that in Willesden. At the Willesden property, he had floorboard space where he would keep the bodies and a garden where he would dispose of them.”

“He would sometimes place the bodies in his armchair, go to work, then come back and talk to them. It was when he moved to Cranley Gardens and didn’t have an outdoor space that he started dissecting the bodies and flushing them down the toilet. Of course, the drains were blocked so Dyno-Rod were called to unblock them, which is when the suspicion started and it became apparent that the blocked drains were in fact blocked with human remains. The police were called to investigate and that is where my character, DCI Peter Jay, comes in.”

Who was DCI Peter Jay and how did he come in contact with Nilsen?

“He was a Metropolitan Police Detective. He worked his way up in the police force and had a very long and successful career. He started out as a bobby, did traffic duty and the menial work you have to do in order to rise up the ranks. He then became a detective in and around Soho. Peter Jay was very well-known within professional crime gangs – he was somewhat of a face. He would deal with murder cases, so it’s not like he had never worked on serious cases like Dennis Nilsen before. He got called to Nilsen’s property and had to wait for Nilsen to return from work and when he turned up, they explained that they had arrived to  investigate possible human remains found in the property’s drains.”

“As they walk him up to his flat, Peter and his colleague Steve McCusker are met with the stench of death as Dennis opens his door. It was then that they recognised what they were dealing with. Peter literally said to Nilsen, ‘Don’t mess me about, where’s the rest of the body?’ and Nilsen said, ‘It’s over there in the wardrobe’.

They arrested Nilsen, brought him to the police car and Steve McCusker said, ‘Are we talking one body or two?’, to which Nilsen replied, ‘I think it’s more like 15’. At the police station they interrogated him and it was a process of Dennis Nilsen revealing everything that he had done. He was like an open book. In a weird way, the challenge for the police was the fact that it was a murder investigation in reverse: they had this man admitting to all these counts of murder, and yet they only had two possible bodies.”

“Dennis said it was a weird compulsion he got to do these things. He never actually wanted to do these horrific acts when he befriended these young individuals, whether they were homeless, or gay men, or just needed a bed or some food for the night. He described it as somewhat going into a trance fuelled by booze and music and other factors, but he did admit to the police as soon as they turned up that it was a feeling of being thankful they had arrived. He said to them, ‘If you hadn’t caught me, it wouldn’t have been 15, it would have been 150’.”

“Even with all of the experience that Peter Jay had as a policeman, he had never encountered anything of this magnitude and scale. The world’s media and the spotlight were on Peter himself to lead the investigation with his team of officers. It was a really pressurised and difficult situation they had to go through.”

What research did you do to portray Peter?

“ITV were incredible. They gave me links to their Nilsen documentaries and news interviews, which were really helpful as Peter seems to be in all of them. He was a very fluent and intelligent speaker, and a diligent and incredibly good policeman. More than anything, his driving force throughout this case was to get closure for the families of the victims. They ended up only convicting Nilsen for six murders because it was costing a huge amount of money and resources for the police force, so they decided to shut it down. It is quite telling that two years after the Nilsen case was over, he decided to leave the police force. I do think there was a lot of regret that he couldn’t give closure to a lot of the families. I think that was the torment for him.”

“In terms of additional research, I went and met his widow Linda, who features in the drama, and their son Simon. Sadly, Peter passed away a couple of years ago but they were brilliant to sit down with. They really allowed me to get close to who he was as a person.”

What were the challenges playing a real-life person like Peter?

“I’ve played real characters before like Colin Parry and Ronnie Biggs. There’s extra responsibility when you take on a real person, but I maybe had more artistic license with Peter Jay because he’s not particularly  famous – no one really knows who he is or what he looks like, so that allowed me a bit more freedom. I guess more than anything in this story: Peter is the heart and soul of it. He’s very much the eyes of the audience.” 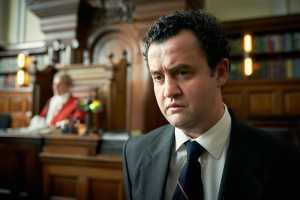 Had you heard about the case before?

“I had heard about the case before. I used to live in Crouch End and the daily commute to my son’s school would always take me down Cranley Gardens. Occasionally, of course the Dennis Nilsen story did pop into my head and I was always fascinated as to what number house it was. I know our writer Luke Neal through mutual friends. I knew him from years ago and I bumped into him on the Tube, going back five or six years  ago, and he said he was writing something on Dennis Nilsen. It’s taken this long to come to fruition.”

“It’s an infamous case. It’s up there with the Moors Murders and Harold Shipman; there’s this sort of macabre fascination to cases like this. It’s a controversial subject matter to bring to the screen for all its darkness and  how evil the whole thing was.

This drama is a very fascinating example of what those people went through. In the early 80s, men were never encouraged to talk about their feelings. Peter Jay and his team didn’t have any counselling sessions or anything like that. Their only outlet really was going to the pub and drinking considerable amounts of alcohol to get through it. That’s the way things were dealt with in the 80s.”

What were the main differences in police then to now?

“As technology develops and other factors like that, policing methods have improved. If it happened now, arguably you would be able to find the identities of all the victims because they just didn’t have the resources then that we do today. It’s quite an interesting examination into policing at that time”

Did you speak with Brian Masters before starting the project?

“I met Brian once when I was filming as he arrived on set one day, and I had a conversation with him. I spoke to him about Peter and he described him as being very PC Plod, which made me laugh because I’m trying to invest so much humanity into the character. He told me that he did everything by the book and I said ‘Well, you’re just describing a really thoughtful and diligent policeman though, aren’t you?’. I think what’s so great is that those two characters are just poles apart. For a TV drama they are brilliant characters.

What did you think of David Tennant’s portrayal of Des?

“I think he delivers an utterly spellbinding turn. It was eerie, he physically resembled him – when ITV released that first look image of him, I think everyone was unanimous in saying how much he looked like him. There are documentaries on Nilsen where you can learn about his characteristics and David really did embody that. In the interrogation scene when Des goes into his long rambling speeches, they had already shot myself and Ron Cook – so I’m off camera – but occasionally when you’re working with an actor as brilliant as David is, you sit there observing how brilliant the performance is. I had one of those moments with him and it’s unlike anything he’s done before. It really is quite a spectacular performance that he’s delivered.”

“A lot of policemen described Nilsen as a complete and utter bore. He would just bore on and on and come out with all of these stories and he just didn’t stop talking. In a way, David has embodied that. It’s all a bit throwaway and quite casual but it’s the level of detail that he goes into. For instance, when he describes dissecting the bodies, it’s so flippant that it becomes eerie. Also, there’s one moment where he has to sign the police statement, and David got his phone and nudged me and said, ‘Does that look the same?’. He had completely perfected Nilsen’s signature – it was absolutely identical. It was a glimpse into David’s process and how much he’s gone into his research and how professional he is. He was an absolute joy, as were all of the amazing ensemble actors.”

Peter Jay smokes in every single scene. How was that to play?

“They were those horrible herbal things. When I met Peter’s widow, she said he was on 50-60 cigarettes a day so he was a really, really heavy smoker. One can imagine he was smoking even more under the pressures of that police investigation and with the eyes of the media on him. That was definitely a conscious choice I made to not be afraid of smoking on screen. Lewis, the director, made me this mock award at the end of filming which says ‘the most cigarettes smoked on screen goes to Danny Mays’, which I found very funny.

DES is written by Luke Neal (episodes 1 and 2) and Kelly Jones (episode 3). The series is Directed by Lewis  Arnold.