Every ballroom dance lover who has watched the Strictly Come Dancing television series, will have noted how far choreographers have lifted the traditional waltz, foxtrot, quickstep, and Viennese Waltz beyond their parents’ – perhaps their own? – “lang-arm” days.  So too have Latin dances risen to new, higher, plains.

No longer are waltzing couples’ feet stiffly executing “side, together, rise, drop with straight back and poised head” around the ballroom. Or, in foxtrot, performing combinations of slow, slow, quick quick steps, with a chasse or twinkle added for good measure. Even the fast rhythmic hip, leg and body action that offers choreographic freedom in Latin Quarter dances, like Argentinean Tango, Cuba’s Cha-cha-cha, Paso Doble and America’s jive, have been taken above the technical principles of the 19th and 20th century.

That’s why, dance makers have awakened to patron’s perfectionist pressures. Pressures which leave no place in productions for anything other than excellence from performers, music makers, costumes, sound, sets and lighting designers.

Why has this happened? In simple terms it’s happened because dance, in all its forms, is a visual, living art. By looking at where we have been, we learn to build and shape our immediacy and future. Without that hindsight foresight is lost. Thus dance makers relentlessly explore ways to reinvent well tried step glossary. 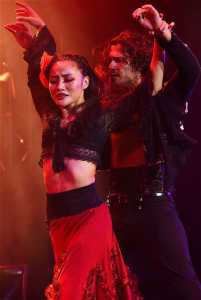 However, the above words are perhaps too serious for founder and producer Harley Medcalf’s highly exhilarating production Burn the Floor – The Rebel Tour. But to appreciate Burn the Floor’s superbly trained athletic dancers, performing remarkably vibrant, complex dances, dressed in exotic costumes, surrounded by ever changing intelligent lighting hues, backcloths, backing tracks, percussion and singers, it is relevant to know from where director/choreographer, Peta Roby, drew inspiration to create this spectacular production.

A production where Roby’s intellect is visible in every detail – excepting imperfect sound tracks and the diction of singers. As Roby’s dancers, shoeless or wearing heels, burnt the floor at lightning speed, dancers jetted viewers into the 21st century’s dance world.  As foot sparks flew, bodies swirled, arms swung, wrists ‘broke,” heads rolled, legs shook, petit tours brought couples together then parted them, men danced separately or in varied numbers as did the women. All this, and more, taken so fast my guest whispered: “I hope there is a fire-extinguisher handy.” I hoped so too. 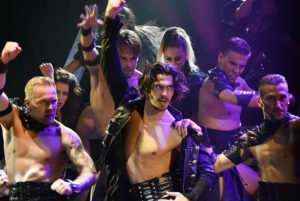 Led by stunningly technically astonishing Victoria Martin, the company comprises 18 dancers drawn from five different countries. These dancers energy and expertise is (almost) beyond belief.  Rebel tour or not, Burn the Floor will long remain in Capetonian’s memory banks.

What: Burn the Floor – The Rebel Tour

Where and when: Baxter Theatre until 17 August 2019