MEGAN FURNISS, who will be performing in her first Cape Town Carnival 2019 on Saturday 16 March, stole a few moments behind the scenes and asked festival Creative Director BRADLEY BAARD a few interesting questions: 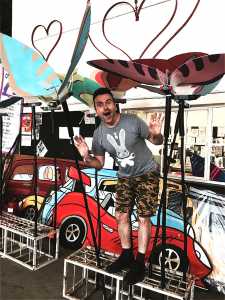 Megan Furniss: You have been involved with the Cape Town Carnival since 2011 – what do you look forward to every year?

Bradley Baard: There are a couple of things that I look forward to or enjoy. One is the stuff that comes out at the brainstorming meetings, because group leaders are in involved, crew are involved, lead performers improv ideas, and I love seeing what everyone comes up with. That’s really fun. Then, another stage is when we interrogate the ideas and polish them before things start getting made. And the next most fun thing is when you start to see it all come together. In between stages is when you pedal, but when, in a rehearsal you suddenly see it come together, what everything is going to look like, it’s amazing. And then, of course when it is coming down the street there’s that “Yay! That’s what it looks like!”

I think what most people in the audience don’t realise is that there is no mass rehearsal for the thing. Everything comes together on the day. So that’s the first AND last time that carnival goes down the road.

MF: Is there anything you dread?

BB: Chopping cool ideas. Something I hate doing. Because by the time you’ve generated something into an idea you kind of love them all, they’re like idea babies, and inevitably some things won’t happen. Sometimes something else is better than another really cool idea, or sometimes no group responds to an idea. And that is part of the process, we reflect back all the ideas to the groups and participants. A strong concept is delivered by a group, performers and a float.

For me personally the challenge is to push on when there are those times when the gees is gone, and you can’t see it coming together, and you haven’t been caught by the next wave of excitement. In between waves and you’re feeling “uuuugggh.” 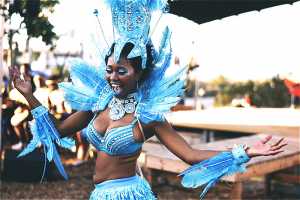 MF: Where do you get your inspiration?

BB: The process almost doesn’t stop. It feels like what I am doing continually is processing. I’ll see something online, or in a garden. One of my favourite costume pieces was inspired by a raggedy piece of palm leaf and I saw the shadow on the wall and I thought, “That would be beautiful. If the face was positioned there, and then this curved thing with these serrated edges (he gets breathless and completely whimsical, arms raised above his head) coming out, that’ll be cool!” I think there is a constant response to the world. One of the things I enjoy is building up a visual vocabulary.

MF: Do you repurpose “stuff”?

BB: Completely. All the time. We do the idea phase free of that, but once we’ve got the ideas and the sub themes, for example when we were doing Mother Nature Mother City we were looking out of the window into the warehouse and we had the idea of a butterfly, but when we saw the frame of a serpent we thought, hang on, what if the butterfly was riding on the back of a caterpillar? High level of repurposing, especially since the materials already have so much energy in them.

MF: How much creative licence do your sponsors give you?

BB: Almost 100%. They give us total freedom. It is amazing. They let us do exactly what we want. The City of Cape Town, National Department of Arts and Culture, premier’s office – have never dictated anything. We defend the integrity of the creative aspect of the carnival because we believe that nobody comes to the carnival to watch advertising. 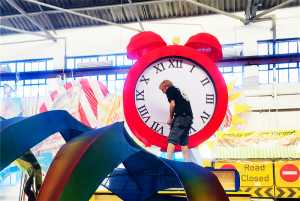 MF: What’s the funniest thing that has happened during your time with the Cape Town Carnival?

BB: More of a stand out moment than a funny moment, was in my first carnival, in Long Street, which was totally chaotic, with gridlocked traffic, and groups losing their floats and crowds being held at bay with step ladders because we hadn’t thought of fencing. In amongst all of this, a lead performer didn’t show up to go in a sort of space ship that was flying over an illuminated city, and the space ship would have looked pilotless if it didn’t have anybody in it! So I turned around to the group of performers that were accompanying the float and said, “Who wants to be in the space ship?” Before I had finished speaking this hand shot up, faster than all of the others, and this young girl stood up, and from that moment she was like Captain Kirk. We put this ladder up, for her to climb up, and as she rose up the ladder she saluted the crowd (full Brad demonstration here), and everyone cheered for her. Delightful. 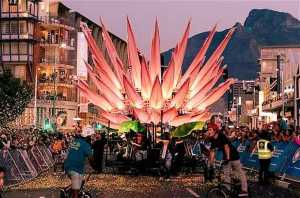 MF: What do you think is your single stand out moment of all the carnivals you’ve worked on?

BB: It was the giant protea float. I was in the far distance, and it came around the corner into the fan walk – I can feel the goose bumps go up the back of my neck even now – this ginormous pink protea came round the corner and its petals opened, full of light, and inside were these lovely lead performers in pink fluff. It was one of those … (Brad is lost for words, eyes huge and face full of wonder.) You suddenly see it, with all the parts, and it is better than you imagined. The whole crowd, all the people go “ooh” in that instant.