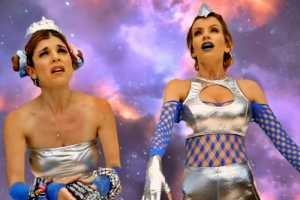 The Celludroid 2021 Film Festival is a celebration of sci-fi, fantasy and animation. The festival will take place from 1 to 10 September 2021, with all titles streaming at the Labia Home Screen, as well as a select few at the Labia Theatre itself.

Best Documentary winner at Celludroid ’16. This in-depth documentary covers the alleged happenings in the controversial Montauk Project conspiracy, where three men claimed that between 1971 and 1983 secret experiments were conducted deep beneath the surface of the Camp Hero Air Force base. Directed by Christopher Garetano. Watch it now at: https://youtu.be/JOKzxYfbjww

This heart-racing claustrophobic French sci-fi thriller has a woman waking up in a strange tube maze filled with deadly traps. The race is on to figure out how to survive and who or what put her there… Great solo performance from Gaia Weiss. Directed by Mathieu Turi (who won Best Picture at the SA Horrorfest with his movie Hostile).

In this much anticipated sequel to the wildly entertaining indie hit, a group of nuclear holocaust survivors living in an abandoned Nazi base on the far side of the Moon board a barely-functioning spacecraft. They travel to the nucleus of the hollow Earth in an attempt to recover the Holy Grail from a group of reptilian shape-shifters who are led by a T-Rex-riding Adolf Hitler! Directed by Timo Vuorensola starring Udo Kier, Lara Rossi, Julia Dietze and comedian Tom Green.

THE SECRET ADVENTURES OF TOM THUMB

This legendary 1993 Bolex Brothers stop-motion animation classic is still as incredible as it was on its release. Weaving through sci-fi, fantasy and dystopian landscapes, we follow tiny Tom, abducted from his parents and taken to a nefarious lab. On escaping he encounters a similarly diminutive community who endeavour to help him return to his parents. An awe-inspiring cinematic feat with drama, action, heartache, triumph and dark humour. Not only are the wonderfully detailed models animated, but also the humans playing roles in this unforgettable movie. Directed by Dave Borthwick.

PLAN 9 FROM OUTER SPACE (Cinema Only!)

The movie that arguably started the unintentional “so bad, it’s good” trend.

The legendary Ed Wood Jr.’s 1950s cult classic is back for a healthy dose of cheesy B-movie laughs. Still a riot after all these decades, everyone must see this at least once in their lifetime (if not annually!) – and so much more fun in cinema with an audience.Features the legendary Bela Lugosi (aka Dracula) in his final role, the delicious Vampira and indestructible Tor Jonson.

The essayistic feature film directed by Johannes Grenzfurthner transcends the traditional documentary and tries to present an overview of political concepts such as freedom, privacy, identity and resistance within our technologically advanced era.

Grenzfurthner couldn’t “tolerate ignorant and topically abusive comments on the ‘Internet’ anymore.” So he teamed up with writer and activist Ishan Raval to: “explain, re-evaluate, and sometimes sacrifice political golden calves of discourse.”

He calls his project an “ideotaining cinematic revue” about political ideas he considers important. Grenzfurthner cites frustration about the current level of political debate as a primary influence for making the film.

In the near future, technology firm Red-Eye is on the verge of developing a revolutionary contact lens that records human sight to replicate memories. The device uses an artificially engineered intelligence known as U.R.M. When the company’s lead researcher is suspiciously murdered at the time of the technology’s release, Thomas Elliot, an old-fashioned police detective investigates with intrepid researcher Margo Elson, who are drawn into searching deeper to apprehend the illusive digital shapeshifter. Directed by Benjamin Ross Hayden.

Set in 2049 A.D., where technology and human lives are intertwined, this fascinating future glimpse from Taiwan consists of three chapters:

The Fortune Telling is about the human trying to control their own destiny via big data analysis.

The Hedgehog Effect is about people’s trauma memory and how to heal it with technology.

The Talk of Love deals with a couple’s attempts to fix their relationship via an assistive device.

Three chapters, three traditional social roles of women from the future of 2049; In picturing the future, perhaps we could also redefine the roles of contemporary women optimistically? Directed by Li-Da Hsu and Chien-Ching Chu.

Directed by Charles Band, this sci-fi classic from Full Moon Features stars Tim Thomerson, as well as Oscar winner Helen Hunt in one of her earlier roles. Also known as Future Cop, Thomerson plays Jack Deth, a Philip Marlowe-esque police detective from the 23rd century who travels to the 1980s to bring his old nemesis to justice. Time travel is made possible whereby people can travel back in time by injecting themselves with a drug that allows them to take over the body of an ancestor.

Our second Full Moon classic is from 1991 and also stars Tim Thomerson as space cop Brick Bardo. When he finds himself on earth however, he is only 13 inches tall! Equipped with his “Kruger Blaster” (the most powerful handgun in the universe), his height doesn’t stop him from kicking earthling ass! Also stars Jackie Earle Haley (Watchmen, A Nightmare On Elm Street, Preacher) in one of his early roles. This highly entertaining movie was directed by Albert Pyun.

In this brand new Full Moon production, Barbie and Kendra enter their third movie, slamming into pandemic panic as the sexy and spacey dynamic duo turn on the TV and get tuned into a viral saga that takes them deep into the forbidden fortress of Area 51 and beyond. The bimbo comedy hi-jinx is supplemented with re-dubbed clips from 1968’s sci-fi schlock Space Thing and 1979’s The Day Time Ended. Directed by Charles Band, starring Cody Renee Cameron, Robin Sydney, Jill Bartlett and voices by Mindy Sterling, Patrick Bristow and more.

THE STARS MY DESTINATION

In this Japanese super-power action film, retired Russian-Japanese soldier Eiji Onodera (Keishi Suenaga) is heading for his hometown in Japan. But on his way, he is caught and given a new mission by his ex-colleague Captain Vadim Dadikov (Gohnosuke Tokuda). Onodera and his father would never be free unless he completes the secret mission. He and the Master Sergeant Zinaida Zasyekina (Satoko Enmei) go to Hokkaido to monitor an ex-officer of Japan Ground Self-Defense Force, Toshio Honda (Taiyo Sawa). Honda has killed 27 people including his colleagues, and is hiding in a mountain with a mysterious beauty, Risa (Riho Yoshioka).  Directed by Keishi Suenaga.

All titles will stream: www.LabiaHomeScreen.co.za