The Community Spectacular 2019 at Artscape Opera, presented by the CPO, is a fantastic showcase of talent from singers to circus stars, says PETA STEWART:

With lighting by Faheem Bardien, sets by Michael Mitchell, overall direction by Aviva Pelham and Allan Committee as master of ceremonies, even without the brilliance of the local performers the Cape Town Philharmonic Orchestra’s fourth Community Spectacular 2019 is set up for success. 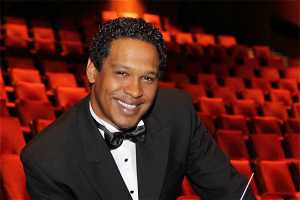 This concert, conducted by Brandon Phillips (pictured left), fresh from his own personal success conducting the German National Youth Orchestra in Berlin and Bonn, takes place at Artscape Opera on 20 October 2019 at 5pm.

This year the orchestra is partnering with the Cape Chamber of Commerce and Industry to showcase the city’s cultural asset to business, showing off not only the artistry of the performers but the diversity of the orchestra’s own talents.  For Louis Heyneman, CEO of the CPO, this is your opportunity to see how the orchestra, so integral to the culture of the city and its business,  can really rock.

“We are presenting another of our multi-functional sides, complementing those that perform symphony concerts to full houses, accompany opera, ballet and musicals and play outdoor and schools concerts for thousands of people.  Our musicians are also involved in the coaching and mentoring of hundreds each year in our youth education and development programmes which comprise orchestras, ensembles and the Masidlale grassroots training project,” he says.

Previous community spectacular concerts have concentrated on, for instance, celebrating Heavenly Quartez or young people making their debut with the orchestra.  The last concert in February mixed more seasoned performers with those who were being given their first chance to be backed by a symphony orchestra.

“The audiences loved them all, and if we could be faulted it was that we hadn’t prepared enough encores,” says Heyneman.  “Facebook was nearly weighed down by positive comments!” 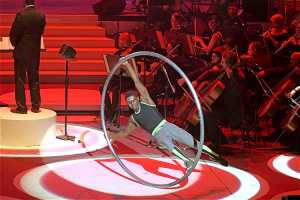 This spectacular will be no different, and some artists are back for a second time.  The Zip Zap Circus’s Phelelani Ndakroga with his cyr wheel (pictured right) and the gravity juggler Jason Barnard and his sidekick Jacobus Classen are back by popular demand.  Singers Jarrad Ricketts and the classically-trained Lynelle Kenned  will sing Barcelona while Lynelle will also be joined by someone new to the line-up, Tracey-Lee Oliver.

For Tracey-Lee, is it an opportunity to give back to the community, and she is really looking forward to it.

Township Opera has been invited back, and one of their numbers will be a tribute to Johnny Clegg.  The CPO is happy to present the Asili Vocal Ensemble, (“The Originals” in Swahili), who only got together in 2017 and made a stunning debut in the CP Youth Wind Ensemble’s SoundsCape@Artscape  earlier this year.  The group, already one of the most exciting in the city, has been invited to perform in Denver , Colorado, next year.  Asilii will sing an Abba Medley and “Circle of Life” from The Lion King.

Asili singers are “honoured and humbled to be performing among Cape Town’s best musicians at the CPO Spectacular. Our mission is to showcase local talent and to reach a diverse audience. This is an immeasurable learning opportunity as well as a wonderful opportunity to gain exposure,” the singers say.

Also introduced to the symphonic platform by SoundsCapes are Oleksii and Michelle, who defy gravity with the beauty and symmetry of their classical strength act.  Saxophonist Don Vino will haunt you with the sound of his instrument, while the CPO takes pleasure in introducing another newbie, Magheeda Adams, who will sing to Don Vino’s accompaniment. Well known to local audiences through her appearances in District Six – The Musical, Madeegha Anders performed with the CP Youth Orchestra in the Suidoosterfees earlier this year. 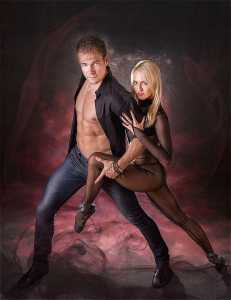 Honour and joy to play with CPO

It’s as diverse a line-up as one can imagine, says Heyneman.  “It’s gratifying when we get told by Jarrad Ricketts that ‘It is an honour to be called upon to collaborate and perform with the CPO’ “. For Oleksii and Michele (pictured left), it is a thrill “to be a part of this production because for us music is the driving force behind our performance. Having the honour of being accompanied by the Cape Town Philharmonic is a collaboration we will always hold very dear.”

Madeegha says that this is a “ different platform to showcase my talent and also for different audiences to hear what I am about. It is also a major opportunity for people in the business to hear and see me in a new light.”

And that’s what the Community Spectacular 2019 is all about – showcasing people – and the orchestra – in different lights. With Elton John, Abba, the Beatles, Freddie Mercury and more, concertgoers can sit back and enjoy works they know presented by entertainers they know.

What: The Community Spectacular 2019

Where and when: Artscape Opera House on 20 October 2019