Kemsley is the co-owner and artistic director of Cape Town’s Courtyard Playhouse – the newly revamped version of what formerly was The Alexander Bar and Theatre. Check out the venue’s Improv Season from January to April 2020.

Sunday Night Improv: Whose Braai is it Anyway?

Produced by The Courtyard Playhouse
Headlining The Long Shots and The Second Liners
Dates: Every Sunday evening
12, 19 January, 2020 at 6pm – 8pm, headlining the Long Shots

A new two-act show of hilarious improvised fun featuring improvisational comedy The Long Shots. Opening with an in-house troupe featuring story titles chosen by the audience, from Drama in Hyperama to Romeo and Juliet Uncut, and spontaneously brought to life by the improvisers.

After a short interval The Long Shots entertain with their unique style of improv – no planning, no scripts. 100% pure unrefined comedy.

They were founded by Jason Delplanque (The Maydays, UK) in 2011 to perform short and long-form improv. Always taking their cue from a ‘what if?!’ angle on life, The Long Shots aims to make Cape Town a place where “yes…and?” becomes the leading paradigm! 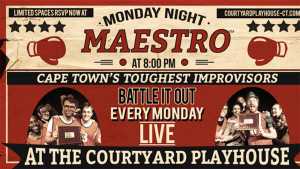 Produced by The Courtyard Playhouse
Licensed format with the International Theatresports Institute
Dates: Every Monday Night from 13 January, 2020

Ten of Cape Town’s virtuoso actors converge for a night of scenes, songs and games based on audience suggestions. You score the players on a scale of 1 to 5, and after each round, the players with the lowest scores are eliminated.

When only one remains they are crowned the Maestro!

Produced by The Courtyard Playhouse
Licensed format with Speechless Inc.

There are 350 PowerPoint presentations given every second around the world. But none quite like this.

Speechless shows off Cape Town’s silly side by letting presenters live out their worst nightmare: giving a presentation with absolutely no preparation. Entertainers, entrepreneurs, and audience members are put on the spot with nothing more than a stage, a mic and a PowerPoint deck full of surprising images that they’ve never seen.

A virtual wheel determines at random what kind of talk they have to give — it can be a TED Talk, a new app being launched, a quarterly report, even a wedding toast — and then our presenters do the best job they can to try to get through the show while attempting to leave the audience Speechless.

Four Directors go head to head to make their artistic vision a reality. To win the Oscar they’ll need to get the work they want out of the actors in real time on stage: western, film noir, romantic comedy and super-hero movies are the flavour of this year’s Academy Awards and you, the audience will decide which flick will be awarded best Motion Picture, which will get cut.

Four Directors, Four Movies, one evening of fast paced electrical theatre where the stakes couldn’t be higher. Directors Cut, coming to a Theatre near you.

There can be only one king gong…

Join in for the fiercest open mic you will ever witness! Local performers attempt to defy the ominous sound of the gong as you, the audience decide their fate.The survivor wins the ‘King Gong’ title…until the next time!