Cross the River in a Crowd is the title of the new exhibition by Dan Halter at the WHATIFTHEWORLD gallery. In this sculptural series, Halter returns to his reflections on the border between South Africa and Zimbabwe. Using ubiquitous checkered plastic weave “Ghana Must Go” bags as the central motif, he explores themes of migration, dislocation, and the trading of resources. 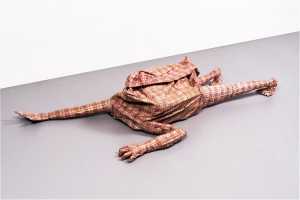 Known most commonly as “China bags” and more recently as “Zimbabwe bags” in South Africa, these bags, widely associated with informal traders, are frequently named after the prevailing community of immigrants specific to a demographic. In Nigeria and many West African countries, the tag “Ghana Must Go” departed from the 1983 Expulsion Order in Nigeria that forced Ghanaian immigrants to flee within 14 days of notification.

“These worn-out membranes carry the record of travel in their grimy patina,” says Halter. Acquired in exchange for new ones with refugees and asylum seekers, these bags are stretched over wire frames made by Zimbabwean wire artist Kuda Kuimba and stitched together by Zimbabwean seamstress Sibongile Tete.

While this blue, red, white and black pattern has leaked into popular visual rhetoric as a symbol of transient urban style, it also signifies the collective trauma of genocide, warfare, and civil insurrection. This is echoed in the exhibition title, taken from the African proverb, “Cross the river in a crowd and the crocodile won’t eat you”. The implication here is that only through grouping together and finding solidarity in the ‘whole’ (rather than one identifiable target), can a people overcome injustices and hardships.

Halter’s rendition, however, presupposes an act of destruction. In light of South Africa’s current economic stagnation and catastrophic unemployment, as well as Zimbabwe’s post-election violence, rampant inflation, and continuing currency crisis in the post-Mugabe era, he seems to suggest that we have in fact already been swallowed; and now urges us to forge a way out. The title presents itself almost as a command to collectivise and a call to action.

Running at the same time as the exhibition by Dan Halter will be Chris Soal’s Field of Vision, his first solo presentation with the gallery. Centralising his engagement with toothpicks as an artistic material, Soal reviews the value placed on these mass-produced, utilitarian objects – designed to be discarded – to make a commentary on the human condition.

What: Dan Halter: Cross the River in a Crowd / Chris Soal: Field of Vision