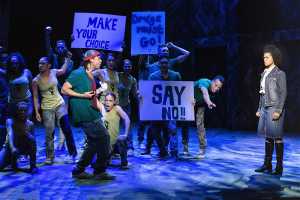 A striking set that makes full use of the Baxter Theatre stage’s height and considerable depth plus a sophisticated electronic projection system supports this tightly scripted reworking of the 1990s musical Poison.

Throw in the impressive choreography and opening night of Danger in the Dark was a polished production being delivered to an appreciative audience.

David Kramer’s reworking of Poison is a stab at humanising the evermore lurid headlines highlighting never-ending stories of the ill-effects of gangsterism, drug abuse, child murders, joblessness and general social neglect emanating from the Cape Flats. Issues of unfulfilled need – be it for compassion, love, employment, justice or just common decency – are explored and while being entertained we are reminded of how society is failing yet another generation.

A successful production in its own right, Poison concentrated on the eponymous bad guy protagonist but now Danger in the Dark  gives prominence to the story of social worker Pamela (Alexis Petersen).

Pamela is a passionate social justice warrior who wants to help a friend in an abusive relationship. As she tries to rally her community against the scourge of drug peddlers, she encourages Juanita (Rushney Ferguson) to leave her controlling gangster husband Michael (Loukmaan Adams). This is a musical so you know the story will end badly for all concerned, even if the tunes are hummable. 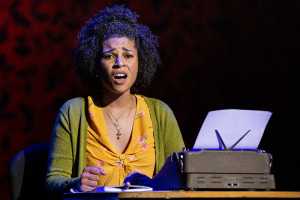 A musical which rings true

Both Petersen and Ferguson are accomplished singers and they pull off their roles with aplomb, but the bad guys dominate as is often the case in real life too. Elton Landrew drips cold calculation and narcissistic self-interest as Poison while Adams combines effortless menace with a hint of childish hurt and confusion around what it actually means to be in a relationship, something neither of them understand outside of the power dynamics of domination and submission.

The Chorus is sharp, dancing is in synch and they gel as an ensemble able to move as one and individually, their grey hoodie costumes are just exactly right and Camillo Lombard’s musical direction keeps up the pace and heightens the atmosphere where necessary.

A cell phone is as prone to pop up as a typewriter in this play which sadly rings true to the experience of growing up surrounded by gangs on the Cape Flats at any time since the 1960s.

What: Danger in the Dark

Where and when: Baxter Theatre until 2 November 2019