Pianist Daniel Kharitonov is back in South Africa to perform with Cape Town Philharmonic Orchestra in its Friends of Orchestral Music Benefit Gala. He spoke to PETA STEWART about his career.

For Daniel Kharitonov, the young Tchaikovsky prize-winning pianist in South Africa to perform with the Cape Town Philharmonic Orchestra in its Friends of Orchestral Music Benefit Gala on 5 September  2019, being a musician was predestined. 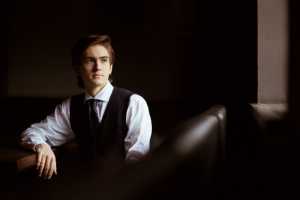 “There is a saying ‘doomed to success’,” he says. “I guess I was ‘doomed to become a musician’. My mother is a violinist and, while pregnant with me, studied and practised a lot. My parents divorced when I was a couple of months old and there was no one to look after me so mum took me to orchestra rehearsals. I must have been around two when I started tapping the rhythm on my buggy in front of the percussionists. The grand piano had won me over. My mother didn’t want me to study music but obviously recognised and supported my enthusiasm for the piano and for composing, so at the age of five I began my professional studies in a special music school.”

Eleven years later he won third prize at the 15th Tchaikovsky International Competition when he was 16 – and continues to stun the world with his electrifying performances, from Gergiev’s Marinsky Orchestra and Carnegie Hall to the CPO where he performed for the first time in 2017.

Being a major prizewinner at one of the world’s most important competitions is momentous in anyone’s life and for Kharitonov it wasn’t much different.

“The Tchaikovsky Competition is truly unique. I am glad that I experienced such intense emotions at such a young age,” he says. The 15th Tchaikovsky Competition in 2015 will be remembered for the huge number of participants, many of whom were already established. So for the first time (and apparently the last) a preliminary round of live auditions was introduced.  Of 61 pianists, only half  made it to the competition.

By way of comparison, he says, “at the 16th competition held this year, there were only 25 participants in the piano category. I am very grateful to my teacher, Valery Piassetski, who encouraged me to participate and supported me in every possible way through this very difficult time. Competing with famous pianists at the age of 16 while there is an age limit of 32, going through two stages of preliminary auditions and four rounds of the competition cost me a lot.”

But the rewards are huge.  The competition brought not only awareness of him as an artist and numerous performances across the world “but also a tremendous responsibility, which I consider as a new level of skill”. And Kharitonov continues bringing this skill to perfection at the Royal College of Music,  where he has been studying since 2016 with  Dmitri Alexeev, a representative of the renowned Russian piano school. 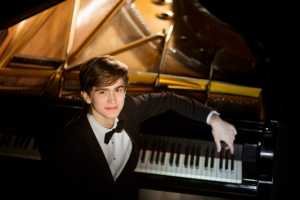 He says he cannot say who has been the most important influence on his life “because there were different people at different times, all of them much-respected professionals. I enjoy listening to recordings of some great masters of the past – Gilels, Rubenstein, Horowitz. I listen, have the music go through me, create something new – something of my very own.”

“Having said all that, my teacher at the Central Music School at Moscow Conservatory, Professor Piassetski, has had the greatest musical impact in my life so far, while laying solid piano performance foundations  and forming a huge technical basis.Professor Alexeev has also had a big impact – even though we sometimes argue about this or that during class, but certainly his opinion is an authoritative one!

“Then there are those musicians like Dmitri Bashkirov who happens to give master classes in London from time to time (and used to be Dmitri Alexeev’s teacher at the Moscow Conservatory, by the way), and Maestro Vladimir Ashkenazy, with whom I had the great privilege to perform together in concerts on a couple of occasions. These people have had the greatest impact on my musical life.”

He will be performing Rachmaninov’s Variations on a Theme of Paganini with the CPO under the direction of Bernhard Gueller with whom he played in 2017.

“I feel very fondly about Rachmaninov’s music and the composer himself, who is one of my favourites. I was lucky to get acquainted with his grandson, Alexandre Rachmaninov, and I know from his words that the composer was a very disciplined and punctual person. There is a Russian saying: ‘Work now, fun later’.  Rachmaninov devoted nearly all his time to work – composition, performance and probably just about half an hour for ‘fun’.”

Kharitonov concludes: “A Rhapsody on a Theme of Paganini is a combination of opposites – here you can simultaneously hear the echoes of romantic virtuoso pianism versus the spirit of jazz culture, a clear structure versus unbridled emotions. This is a challenge to oneself, since even Rachmaninov himself, being a virtuoso pianist, commented in a letter upon finishing the piece: ‘Quite a difficult one, I better start learning.’“

What: Daniel Kharitonov with the CPO