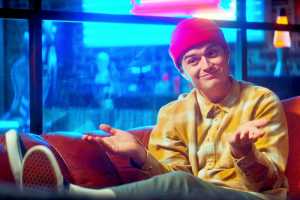 Death to 2021, the follow-up to last year’s Death to 2020, once again riffs on the stand-out events of the past year, with a host of celebs/actors “commentating” on everything from the US Capitol invasion to, of course, the continuing coronavirus pandemic. The satirical comedy special was put together by Black Mirror creators Charlie Brooker and Annabel Jones, and featuring Hugh Grant, Jo Keery (pictured left), Tracey Ullman, Lucy Liu, Stockard Channing, Samson Kayo and Cristin Milioti, amongst others.

It’s a fast-paced ride through the highs and lows of 2021 – and let’s face it, things sunk pretty deep on more then one occasion, lowering the bar overall on a year that many hoped would be better than the shitstorm of 2020, only to be b-slapped once again. As Decider.com sums it up: “Rich guys blasting off in dick-shaped rocket ships, rampant climate change transforming water into raging fire, and bemused lords of the tech sector who refer to truth and lies as competing data streams: Death to 2021 skewers it all, and even bounces into geo-politics with a riff on the Taliban’s return to power in Afghanistan. (An influencer says he looked at their socials, and “actually the ‘Ban seem pretty chill.”)”

The “commentators” clearly relish their roles as unwoke, anti-vax, conservative maniacs – which you have to admit, are great parts to play: “Average British Citizen” Gemma Nerrick (Diane Morgan) laments having to give up eating teachers after watching My Octopus Teacher; Hugh Grant defends the late Prince Phillip as not being a racist, merely having “a racist sense of humour; Cristin Milioti as an “American housewife” says spelling out MAGA with her own faeces is “freedom of speech”. You can see how much fun they were having …

Ultimately, Death to 2021 is a hour-long comedy show with bite-sized takes on the major headlines of the year. With a specific bias, it must be said – US and UK news predominates. It’s snarky, and sneaky, and perfect for a post-prandial blowout when you’re lying on the couch with nothing else to do but scroll through Netflix.