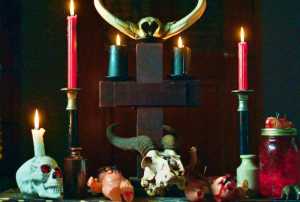 Our collective fascination with the gruesome and macabre seems to double when it is homegrown. We are weird creatures who escape a time of living hell – a deadly pandemic, looting and violence, poverty and hunger, GBV and political instability and insecurity – to watch a documentary series about a murderous ring, led by a psychopath, in our own Krugersdorp. This is what I actually did this past weekend, and by the tweets in the twitterverse I was not alone.

The trend of gruesome documentary series started for me with How to Catch a Murderer (one of my Netflix firsts). I hadn’t realised until then what gripping TV these kinds of stories made, even though the same dreary shots of the same dreary places filled the gaps between the dreary but riveting interviews of all involved.

A whole bunch of not so lekker white people

Devilsdorp is exactly the same formula, just with the bleak town of Krugersdorp as its location, and the heavily accented English and often Afrikaans interviews of police, family, experts and journalists. Change the accents and we are in some American hillbilly town. Actually, come to think of it, there wasn’t a single POC in the entire series. Just a whole bunch of not so lekker white people.

Devilsdorp, and the grizzly, bloody and outrageous murders of 11 people over four years, has the perfect ingredients for a crime documentary series. It has family, religion, Satanism, greed, desperation, gullibility, poverty, and small-town mentality all mixed up in it, but what it also has is an expanded timeline. The first murders took place in 2012 and they went all the way up to 2016. And there were a lot of them! Then add to the mix the usual and very South African “missing police dockets”, a specialist in Satanic crime, a journalist first called to the scene who falls in love with one of the murderers, grieving family members, a state witness, and a police investigator who compares himself to Chuck Norris (I kid you not). It is a lot.

Making sense of the madness

Devilsdorp is a four-part series that tries to make sense of the madness that was a four-year murder spree, with accused including mother, daughter and son. It attempts to contextualise the uncontained craziness, depravity, greed and evil of a group of people “under the influence” of a criminal mastermind. And it is both mesmerising and revolting. I have a feeling that this Showmax original is going to be a South African best seller. Ew.