Factory of Disposable Feelings, a new photographic series by Edson Chagas, is currently running at STEVENSON in Cape Town. 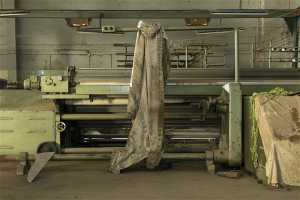 In a shift from the nomadism of Chagas’ acclaimed series Found Not Taken, Factory of Disposable Feelings offers a meditation on place through a sustained interaction with a singular factory in the Angolan capital of Luanda. For Chagas, the project exists as a poetic exploration rather than a documentary one. Images from the interior, exterior and perimeter of this industrial plant, established at the height of Portuguese colonisation, suggest different ways of approaching history, the present and the passage of time that connects them.

During its history, the factory manufactured textiles including bedsheets, diapers and military uniforms. Now under the leadership of a son of the original owner, the parts of the factory which are not disused or abandoned are being reoriented towards the manufacture of agricultural implements. According to Chagas, the title of the exhibition arose from his conversations with people who worked at the factory when it was still open, managing the machines, and with others who continued after it closed, working as security guards. He observes:

“There’s something in looking at a phenomenon from a removed perspective, seeing people and realising that this place was once integral to their lives – and then suddenly it breaks up into objects and pieces. From the passion these people had when they were telling their stories I could sense that this was a space where feelings are disposable. It felt like a place where a lot of things were left behind but still hold a story of some sort – one I could not see but only feel. Now it’s a question of anticipating what the future holds. There is this passage of time that is interesting …”

Chagas, recipient of an African Art Award from the Smithsonian National Museum of African Art in 2018, is currently exhibiting in Mask: The Art of Transformation at Kunstmuseum Bonn and Sixth Nature, part of the Porto Photography Biennial. This is his second solo exhibition at Stevenson.

Edson Chagas was born in 1977 in Luanda, Angola, where he lives.

He studied photography at the University of Wales in Newport (2008); London College of Communication (2007); Portugal’s Escola Técnica de Imagem e Comunicação (2002), and Centro Comunitário de Arcena (1999). In 2013 his Found Not Taken series was exhibited in Luanda, Encyclopedic City, the Angolan Pavilion at the 55th Venice Biennale, winning the Golden Lion for best national pavilion; the series was later featured in the inaugural exhibitions at Zeitz Museum of Contemporary Art Africa (2017).