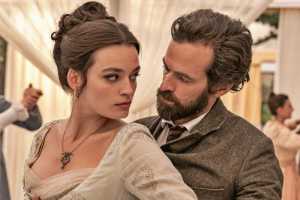 I’ve gone soft, I tell ya. I loved Eiffel. I allowed myself to be swept up by the time and place (who doesn’t love Paris?) and I was drawn into this completely delicious, if not implausible love story about the man who built the Eiffel tower as homage to a woman from his past.

The Eiffel tower is Paris. This strange steel triangle is more than a monument. It is artistic defiance, beauty, and symbol. There is nothing like it and everybody knows it. It is both familiar and awe inspiring, hilarious and sombre, a man-made middle finger in the city of love, a massive capital letter A on the banks of the Seine.

Story of the building of the tower

The plot is quite simply the story of the building of the tower against all odds and popular belief, and the love story that inspired it. In the film’s present, Gustave Eiffel has to sell his idea of the tower, and we witness his struggle with the powers that be, the construction restraints of the time, the lack of belief in the project, and many, many sketches of the tower, from many, many angles. The flashbacks deal with his lost love, the mysterious Adrienne Bourgés (Emma Mackey, completely, extremely different from her character Maeve from Sex Education), who reappears to ignite his inspiration.

I was completely sucked in by the style and setting. A period piece in the extraordinary, and familiar city of Paris is quite an achievement. The costumes, set, and attitudes were fantastic and believable, but it was the lighting that blew me away. The whole film felt like it was shot in natural light, the pre-electric light of the time, and it is beautiful. Sometimes the scenes are dark and obscure. Sometimes the daylight gives us a sense of season, time, and place. Sometimes it is the lighting that is romance, despair, tension.

Tower built because of love

There are holes. Adrienne hardly ages from the young girl to mysterious adult, while just her clothes become more sophisticated. This is not matched by Gustave’s maturing, even though most of that happens through his facial hair. And Gustave’s daughter Claire (delightfully played by Armande Boulanger) has the really boring task of being the daughter of the dead wife. But, honestly, I didn’t care.

I loved Eiffel. I loved the French, and the city, and the clothes, and the labourers, and the tower built because of love.