Africa’s premier documentary festival, the Encounters SA International Documentary Festival 2020, has been postponed. The festival, now in its 22nd year, was due to run in June, but due to the COVID-19 pandemic, will be postponed until August or September 2020. 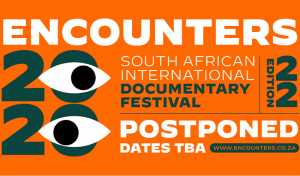 Encounters Festival Director Mandisa Ralane said, “The Board and the Organising Team have delayed the decision to postpone the festival for as long as they could, however it is clearly not possible to hold the event in June as planned”.

She continued, “We have paid careful attention to responses by our international counterparts in applying innovative online programmes and we are exploring plans to deliver some programmes to our constituency in a similar way. Our commitment is to honor the excellent films programmed with a platform that promotes them to an engaged local audience and allows for conversations to happen around the topics chosen. The safety of our patrons is paramount hence the decision to adopt appropriate online platforms.”

The Encounters Festival also features workshops, industry master classes and discussions. As part of this the S.A.G.E/Encounters Rough Cut Lab has also been postponed. The Lab offers professional support and mentoring for three documentary projects which are in the “rough cut” phase. The deadline for submissions has been extended to 5 June 2020.

Renowned for its contemporary and cosmopolitan programme, the Encounters Festival features both South African and world premieres, as well as award-winning work fresh from the international documentary circuit. It is one of the oldest festivals on the continent, and actively supports and promotes local and African films, filmmakers and festivals to an international market.

While the Encounters SA International Documentary Festival 2020 programme has yet to be finalised, several acclaimed documentaries will have their African premieres at the festival and a number of international documentary winners have been confirmed. The full list will be announced on May 30th.