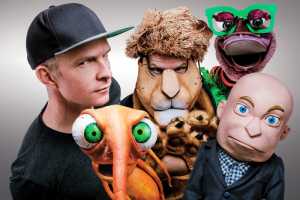 There are five new shows at the Theatre on the Bay running between February and April 2022, with comedy, drama and more on the bill. And if you join the Theatrics club, you’ll save 50% on tickets if you book for a minimum of three shows.

The season starts with the award-winning Gertrude Stein and a Companion, an evocative and witty play about the long-standing relationship between Gertrude Stein and Alice B. Toklas. The two-hander features Lynita Crofford and Shirley Johnston, who both received the prestigious Naledi award for Best Lead Performance in a Play for their roles. The show will run from 1 to 5 February 2022.

Next up is Ramapuppet, featuring Conrad Koch and his irrepressible sidekick Chester Missing, as well as few extra friends (see pic above). The show features just over an hour of world-class comedic ventriloquism which pokes fun at the bonkers stuff South Africans face. From lockdown to looting, from Zoom meetings to alcohol bans, and that manager at Checkers who wields more power than the President, there is so much in Mzansi to laugh at! From 8 to 12 February 2022.

Then there’s Shirley Valentine, the much beloved play about a bored, frustrated woman who talks to the wall in her kitchen for lack of conversation with her husband; who then takes a solo holiday in Greece where her life changes. Natasha Sutherland takes the lead in this production, directed by Gina Shmukler.  From 14 February to 15 March 2022.

This is followed by The Dead Tinder Society, which explores the funny, scary, vulnerable world of dating. Not just any dating – online dating. Specifically, Tinder. This hilarious romp through lust, one-night stands, rage, heartbreak, desire, friendship, loyalty and re-discovering oneself after the dust has settled, tries to answer many questions. From 8 to 19 March 2022.

The season ends with The Last Five Years, a one-act drama-comedy telling the story of the short-lived marriage between Catherine Hiatt, a struggling actress, and Jamie Wellerstein, an up-and-coming novelist on the brink of getting his big break. This story of two people meeting at the wrong time in their lives is told in a fresh and new manner. From 29 March to 9 April 2022.

What: Five new shows at the Theatre on the Bay

Find out more: Theatrics savings at the Theatre on the Bay here