Gina Beukes is back in South Africa to play a series of concerts in Gauteng and the Cape. She tells PETA STEWART what she’s been up to:

Violinist Gina will be remembered as concertmaster of the Cape Town Symphony more than 20 years ago. The tails she wore just added to her appearance as her musicality moved the audience. 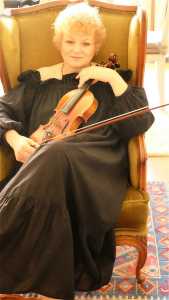 She will be performing at the Cape Town Concert Series on 10 August 2019 and with the Gauteng Philharmonic on 4 and 5 August 2019. All concerts mark Women’s Day, and her accompanists are Esthea Kruger, the new piano teacher at the University of Cape Town, and in Pretoria Peter Cartwright.

Gina has settled in Belgium, after travelling from Johannesburg to Stellenbosch, Cape Town to London. Home is now in a village close to Brussels, Ghent and Antwerp, from 2010, when she took a sabbatical from the London Symphony Orchestra where she then played in the viola section.

“I wanted to spend a year with my daughter Hannah without all the touring and the concerts. Hannah, now 14, went to nursery school and learnt Flemish. She was so happy in Belgium so I dropped my workload in LSO to 50 percent and commuted from Brussels to London. It was exhausting. I also auditioned for Flemish Opera, which was recently voted the Best Opera House in the world, and won the solo viola position,” says Gina.

The commute became too much so she resigned from the LSO …. just in time, she thinks, as Brexit is going to make it very difficult for musicians to play in Europe.

Gina recalls the times she spent working in Stellenbosch and Cape Town during the 1990s as amongst the happiest of her life.

“I made friends with remarkable people and learnt so much both about orchestral playing, chamber music, solo playing and teaching. Cape Town is just gob-smackingly gorgeous and I can’t wait to be back. Granted some of my best friends passed away since I left for Europe in the 90s but I will dedicate a part of the concert to them in my mind.”   These include Oliver De Groote, Melanie Horne, John and Lona Antoniades, Lang Dawid de Villiers  and long time concertgoer Barbara Robinson.

Gina left to study and pursue a career. She was accepted by Dorothy DeLay in her class at the Juilliard. She won a scholarship to the College of Music at Cincinnati and her living costs were covered for all but the last year by Mario Chiavelli. She received her M.Mus there in 1989.  She came back to South Africa to make money to pay for her final year and then started a doctorate in Cincinnati, returning to co-lead the CTSO with Gerard Korsten and Jürgen Schwietering, also playing concertos.

When Korsten left, the concertmaster’s job was given to a man and the guest conductor at the time told her to promise him she would leave.

She kept her promise, left Cape Town,  joined the London Philharmonic and now looks forward to her retirement in seven or eight years after a fantastic career in England where she has played under the direction of Solti, Gergiev, Mazur, Haitink, Sawallisch, Franz Welzer-Möst, Colin Davis, Eschenbach and Barenboim.

“I am ready to sit on the verandah and watch the new generation take over,” she says.

Where and when: Gauteng Philharmonic at the Brooklyn Theatre, 3 and 4 August 2019