Guest conductor Rossen Milanov was born for the stage, PETA STEWART finds out when she speaks to the Bulgarian maestro: 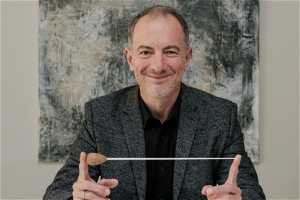 Milanov, who is making his debut with the Cape Town Philharmonic Orchestra in two concerts on 22 and 29 August 2019, grew up  listening to his parents’ Bulgarian pop songs.

He would memorise them, then the next night perform them for the whole family. One day, friends brought him a recording of Tchaikovsky’s Piano Concerto No.  1 with Sviatoslav Richter and he was sold on classics.  He was just six at the time. At the same age, he was learning to play the violin and then sang in the Children’s Choir of the Bulgarian Radio and TV which toured internationally.

By the time he was 12, he had been to all five continents. Piano came next and he also started with his first ear training classes, helped by his mother who would often take him and his brother to symphony concerts and opera performances. “I have wonderful memories,” he says. “I was able to hear some of the biggest Bulgarian opera stars such as Nicolai Ghiaurov and Mirella Freni when they were still singing in the Sofia National Opera.”

The oboe came naturally as an extension of the voice he had as a child, he says. “It allowed me to continue performing with other people in an orchestra. The conducting came naturally  – I was 17 – as my desire to get deeper into the fabric of the music grew stronger.” Perhaps that led to his affinity to conducting new works!

Conducting soon consumed him, and positions soon followed. Today he is the Music Director /Chief Conductor of the Columbus Symphony Orchestra, the Chautauqua Symphony Orchestra and Princeton Symphony Orchestra in the US, of the Orquesta Sinfónica del Principado de Asturias in Spain and the RTV Slovenian Symphonic Orchestra in  Ljubliana. In 2013, he relinquished his position as Chief Conductor of the New Symphony  Orchestra in his native Sofia after 17 years. He is also a ballet and opera conductor, and has a guest conducting career in many other cities around the world, including Durban.  He also loves conducting opera and ballet, and says: “I love all types of musical projects and they all provide wonderful experiences in their own unique ways.”

Milanov,  who moved to America in 1990, credits the composer Vassil Kazandjiev, his first conducting teacher, as being one of the greatest influences on his life, along with his professor at the Juilliard School, Otto Werner Mueller “for teaching me to always respect the composer and bring truth to the musical text.” 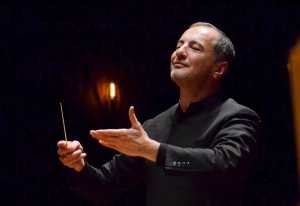 Most important part of his life

Conducting remains the most important part of his life. “I view my role as a conductor as a dedication above all to serve the music; to be the advocate for the composers, to create a conducive and inspiring environment for the musicians to perform at their best and to promote the music as a live art form to as wide as possible audience including education and community outreach. These are goals that in my opinion are very important—to make music accessible both as an experience and as a necessity,” says Milanov.

His concerts in Cape Town will feature pianist Natasha Paremski, a pianist with whom he has a long professional relationship (Grieg Piano Concerto on 22 August 2019) and cellist Gary Hoffman, who will perform the Walton Cello Concerto on 29 August 2019. Main works, respectively, are Mendelssohn’s Scottish Symphony and  Sheherazade by Rimsky-Korsakov.  There will be a curtain-raiser with the CPYO and Brandon Phillips prior to the first concert; Milanov will be interviewed in the pre-concerts talks before both concerts at 7.15pm on the evening’s programme.  Dress rehearsals will be open to the public at 11am. Tickets for the dress rehearsals are at the door.

Milanov arrives in South Africa from a nine-week season with the Chautauqua Institution Symphony Orchestra on the bank of Lake Chautauqua in New York state. During the time, he conducted more than a dozen musical programs ranging from concerts, educational programs, collaborations with ballet and theatre with world-renowned soloists such as Joshua Bell, Dawn Upshaw and Augustin Hadelich.

In South Africa, he plays host to a number of Princeton Symphony Orchestra supporters and board members, who are on a tour of South Africa. “I want to show them the city’s sophistication and charm, the incredible natural beauty of the surrounding area, and the friendly and welcoming nature of South Africans.” And of course, he plans a visit to a game park.

What: Symphony concerts with the Cape Town Philharmonic and conductor Rossen Milanov