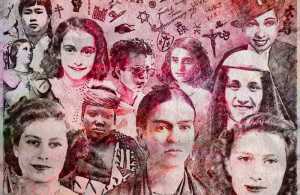 History Girls, by Bianca Flanders (Book) and Marcel Meyer (Music and Lyrics), intertwines the narratives of 11 remarkable young women, aged 12 to 21, who, in their own individual ways, went on to shape world history.

Although the girls featured in the musical stem from diverse backgrounds, nationalities, and historical eras, they each displayed a resilience of spirit that united them in their determination to make a marked difference in their respective communities.

The girls featured in History Girls are French saint and freedom fighter Joan of Arc; South African prophetess Nongqawuse; celebrated entertainer and civil rights activist Josephine Baker; acclaimed Mexican painter Frida Kahlo; legendary humanitarian and saint, Mother Teresa; Indira Gandhi, India’s first and only female Prime Minister; German Dutch diarist Anne Frank, who remains one of the most prominent victims of the Holocaust; Queen Elizabeth II and her younger sister Princess Margaret; civil rights activist Elizabeth Ann Eckford, one of the ‘Little Rock Nine’, a group of African-American students who, in 1957, were the first black students to attend classes at the formerly segregated Little Rock Central High School in Arkansas and Sadako Sasaki, a victim of the Atomic bombing of Hiroshima, who is best known for folding one thousand origami paper cranes before her death in 1955. Sasaki to this day, is a symbol of the innocent victims of nuclear warfare.

From 17 – 27 March 2021, selected showcase performances of this work-in-progress be open to the public at the Galloway Theatre on the Waterfront Theatre School Campus.

This showcase production will feature the acting, singing, and dancing talents of students from the Waterfront Theatre School under the direction of Fred Abrahamse.

Music Direction is by Jaco Griessel, founding director of Tally Ho! Productions. Griessel is also responsible for the musical arrangement and will accompany the performers at the performances.

Where and when: Galloway Theatre, Waterfront Theatre School from 17 to 27 March 2021