IN THE TALL GRASS. Based on a novella by Stephen King and Joe Hill. Directed by Vincenzo Natali with Harrison Gilbertson, Laysla De Oliveira, Avery Whitted and Patrick Wilson. Netflix. 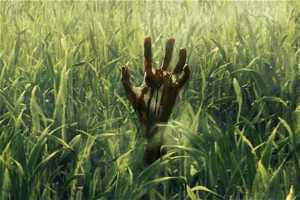 There’s a clue when you read the credits for In the Tall Grass – where it says “based on a novella by Stephen King and Joe Hill.” A novella is generally a short read (even when Mister King is involved). So how can one spin it out into a one hour forty minute feature film?

The answer is – one can’t. Not without being simultaneously repetitious and ridiculous. In the Tall Grass should never have been stretched into a long form. It was a perfectly rounded, nicely creepy short horror story. But as a movie, it seems to have caused mainly  irritation, mostly along “why the feck did I just waste 100 minutes of my life?” lines.

I felt the same. King and Hill’s original tale was about a brother and sister who’re on a cross country trip. She’s pregnant, and going to stay with her aunt and uncle until the child is born, and he’s being supportive. At some point (in the middle of nowhere, on a road surrounded by tall grass) they stop when they hear a child calling for help. He seems to be lost in a field. When they try and find him, they also get lost. The grass, turns out, is a kind of supernatural maze, with a weird stone at its centre which has sinister powers.

All of this is repeated in the film – with several additions and a different ending. So there’s also a boyfriend, and an abandoned house, and a shifting time frame (at some point the siblings appear to have been in the field for two months. Which doesn’t make sense, because they never eat anything and the pregnant girl stays the same size). Mostly, though, there’s just a lot of grass, with the occasional dead body to heighten the horror factor (the lost boy’s father and mother, as in the novella, make an appearance but – spoiler alert – they’re not around for that long).

Sadly, In the Tall Grass is ultimately a weak adaptation of what was a pretty good story. But like with so many Stephen King screen versions, the fear factor never matches what the written word can conjure up. Sometimes, like the recently released Gerald’s Game, it comes close. Also, the rebooted It works well. But these are uncommon examples in a canon of conversions that haven’t really distinguished themselves.

Suggestion: Just watch the first 15 minutes of this one to get an idea of what it’s about, and then move on, instead of wasting over an hour of your time. It’s just grass, people.

What: In the Tall Grass

Keeping up with the Kardashians Season 18