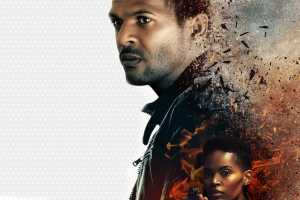 Following its overseas premiere at the Fantasia International Film Festival last year, local edge-of-your-seat action film, Indemnity will open in South African cinemas on the weekend from 14 May 2022.

Indemnity tells the story of Theo Abrahams (Jarrid Geduld) an ex-fireman suffering from severe Post Traumatic Stress Disorder (PTSD), a theme which is extensively explored in the film. Unable to return to work, Theo turns to alcohol and becomes increasingly frustrated and volatile.

His world is rocked when his journalist wife Angela (Nicole Fortuin) is murdered – and he is the prime suspect. Theo soon finds himself on the run from the police for a murder he is positive he didn’t commit. As he is hunted by Deputy Chief Alan Shard (Andre Jacobs) and Detective Rene Williamson (Gail Mabalane), connections are revealed between his past, the origin of his PTSD, the murder of his wife, and a government conspiracy with chilling implications.

Indemnity is an intense film which moves from one thrilling action set to the next with Taute, who co-wrote Nosipho Dumisa’s award-winning Number 37 and the Netflix series Blood & Water, showcasing his talent as an action director.

Driven by SAFTA-award winning Geduld’s performance, this paranoid conspiracy thriller seamlessly weaves together punchy action sequences with a story of heart and emotion. It’s been described by The Los Angeles Times as “a stylish, high-stakes thriller laced with eroticism and subterfuge”. Best-selling author, film critic and award-winning South African lecturer Leon van Nierop called it “the bravest, best and most balanced South African action film ever to be made”.

Indemnity was produced by Gambit Films, in association with M-Net Films, Marche Media, National Film and Video Foundation and the Department of Trade, Industry and Competition.