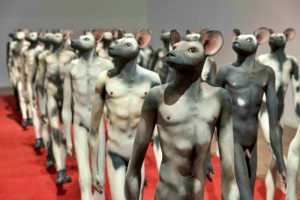 Local audiences have had two years of rapid regionalisation. But as the world haltingly emerges from its slumber, Stevenson has set out to actively reintroduce the joy of discovery into its programme – including a series of idiosyncratic two-person exhibitions. The first pairing, titled Juxtapositions, will feature work by Jane Alexander and Shine Shivan, two artists from different continents working in different mediums whose work resonates in unexpected ways. The exhibition will run at the Stevenson Gallery in Woodstock until 30 April 2022.

Shine Shivan (born 1981, India) has developed a distinct language depicting mythological figures and gods from Indian cultures. Working mostly on paper, ranging in size from intimate to large-scale triptychs, Shivan’s forms emerge from Vedic traditions and the dynamics of power, love and wisdom that they embody. 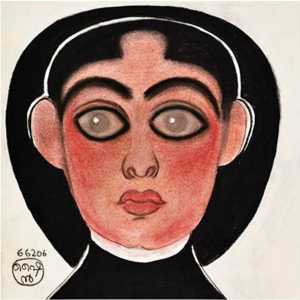 The eyes have it …

The animated eyes, belonging to gods and creatures alike, that characterise the figures in both artists’ work, although veiled in Alexander’s Attendant (2008-10), set up a trans-dimensional conversation throughout. In Shivan’s Study of forms (2019-22) clerical collared figures seem transfixed in unblinking reverie; in his Nandan series (2019-22), in which Krishna battles the serpent Kaliya, the god’s open-eyed knowing meets the five-headed serpent’s reflective orbs.

The central gallery is a pantheon: Shivan’s mythic figures dance amongst themselves and with mortals, inviting us to witness their ecstasies, while Alexander’s sacred messengers, Harbinger (2004) with ghost (2007) and hobbled ruminant (2003-04), appear to transit between worlds.

Alexander’s Infantry with beast (2012) is shown in Cape Town for the first time. Inextricably bound to one another, seemingly under the command of a small dog-like creature, a phalanx of 27 hybrids parade forward, alluding to the violent fulfilment of unknown destiny. 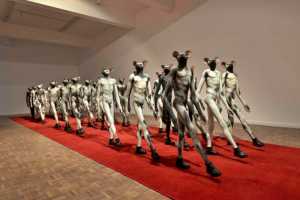 The gallery has presented several installations by Alexander over the years, most recently Infirmary as part of the group exhibition my whole body changed into something else, and Verity, Faith and Justice at the Amsterdam gallery in 2021. This will be Alexander’s most expansive exhibition of work in Cape Town in many years.

Shivan shows in South Africa for the first time. He has recently presented solo exhibitions at Galerie Felix Frachon, Brussels, and Sakshi Gallery, Mumbai. He has been selected for the 5th Kochi-Muziris Biennale, In our veins flow ink and fire, postponed to late 2022. The artist lives and works in Faridabad, India.

Where and when: Stevenson Gallery, Woodstock from 26 March to 30 April 2022