Jo Ractliffe will exhibit her latest body of work, titled Signs of Life, at Stevenson in Cape Town, an exhibition which begins and ends with the sea. This is her fourth solo exhibition at the gallery. 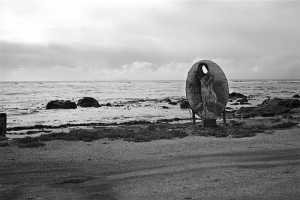 I live in a house on the mountainside, overlooking the sea. Every morning I breathe in the sea’s air. It’s a smell like no other, sometimes intensely humic, at other times bearing just the faintest trace of brine. I draw it in as deeply as I can, as if that breath could gather in all the depth of the ocean. It fills me with a pure momentary contentment and I know I am here with the living, not the dead.

In 2015 I sustained an injury that altered my life and the way I see things. Consequently, my photography has shifted away from the research-based, extended photo essay, which required lengthy and repeated journeys into the landscape. These days I find myself working in spurts, more spontaneously and responsively, and observing the dynamics that emerge when a collection of apparently disparate images, made without a clear or sustained intention on my part, comes together.

I find myself less invested in my own desires than in what the photographs appear to want from each other. When selecting and editing images for Everything is Everything (2017), I was curious to see the patterns and repetitions that had developed – independently, it seemed, of my intentions – as well as the tone of the work as a whole – despite the range of visual attitudes, photographic modes and camera equipment used over a 30-year period. Similarly, with this body of work, there have been a number of images that have refused to comply with my attempts to edit them out and repeatedly found their way back into the group. This may sound strange: we don’t usually grant the image its own agency, but I’m beginning to see that photographs do have their own force; they push back at us, and if we pay attention, we can enter into different relations with them.

Most of the photographs on this exhibition were made during the past 45 months; a few extend back as far as 1986. They come from many places: the Southern Cape, up the West Coast, to Angola and across the Atlantic to Mexico. From the mermaid in St Helena Bay to Buffel, the southern elephant seal, who journeyed some 2 100 kilometres from Marion Island to undergo his catastrophic moult on Fish Hoek beach earlier this year, this exhibition begins and ends with the sea. 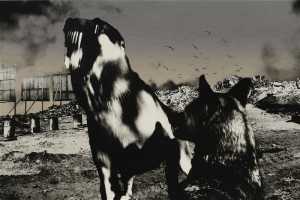 Jo Ractliffe was born in 1961 in Cape Town and lives there.

Jo Ractliffe has held fellowships at the Centre for Curating the Archive, University of Cape Town (2014); the Wits Institute for Social and Economic Research, Johannesburg (2010); the Ampersand Foundation, New York (2008); as well as the Christian Merian Stiftung fellowship at iaab studios, Basel, Switzerland (2001); and the Ecole Cantonale d’Art du Vallais fellowship in Sierre, Switzerland (2001).

What: Jo Ractliffe: Signs of Life