The Johnny Clegg Concert in the Park tribute at Emmarentia Botanical Gardens in Johannesburg sees Johnny’s long-time friend Sipho Mchunu from Juluka pay homage to a unique partnership that started in the early 70’s. 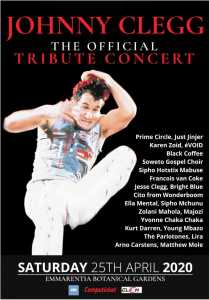 The show on 25 April, 2020, also stages Ella Mental, éVOID (flying in from London) – both of which performed alongside Johnny at the Ellis Park Stadium iconic Concert in the Park in 1985, plus Bright Blue.

Guitarist and singer songwriter, Clegg captured the hearts of a nation and the concert will feature fellow musicians who will commemorate his life and his career.

Jenny Clegg shares the spirit of the Great Heart

Jenny Clegg says: “Jesse, Jaron and I are incredibly excited and proud to be able to celebrate Johnny’s life with a day of music and togetherness.  For someone who was so passionate about human connection and the role of music, art and culture, this event embraces who he was and what his legacy stands for. We are humbled by how many incredible artists are participating in honouring his memory and we look forward to sharing this special day with you in the spirit of the Great Heart.”

There will also be a dance tribute performed by dancers from Zululand and local hostels.

“Johnny’s style of music traversed cultural barriers like few others and he used his music to speak to every person and to show us what it was to embrace other cultures without losing your identity. This tribute show is a dedication to his life and the deep footprints that he has left in the hearts of the African nation,” adds Johnny’s long-time manager, Roddy Quin (Real Concerts). Money will be raised at the event for the Click Foundation.

VIP Adult: R1600
VIP Children (under 12): R1600
Secure parking from 9am at Roosevelt High School at R25 per vehicle via Computicket.