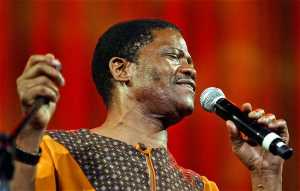 Joseph Shabalala from Ladysmith Black Mambazo has died, reports KAREN RUTTER.  The founder of the Grammy-award-winning isicathamiya band was 78. According to the group manager group manager Xolani Majozi, he passed away this Tuesday morning, 11 February 2020, in hospital in Pretoria. His wife, Thokozile Shabalala, was at his side.

Shabalala had been struggling with ill health for some time, leading him to retire from Ladysmith Black Mambazo in 2014. The band is currently on tour in the USA, and are reportedly “devastated” by the news.

Shabalala was born in Ladismith and began singing and playing guitar from an early age. In the late 1950s he explored the isicathamiya a capella vocal style, leading him to form the band Ladysmith Black Mambazo. The group secured a recording contract and soon proved very popular with audiences.

In1986 American singer Paul Simon came to South Africa to collaborate with local musicians for his album Graceland. He recorded the song “Homeless” with Ladysmith Black Mambazo – a song which was to catapult the band into the international spotlight. They also sang on the songs “Diamonds on the Soles of Her Shoes” and “You Can Call Me Al”. They have been performing and touring internationally ever since, winning five Grammy awards and being nominated for 16 more.

Ladysmith Black Mambazo were a favourite of former President Nelson Mandela, who requested they at his inauguration and at several of his birthday parties. The band has also recorded and/or performed with Michael Jackson, Dolly Parton, Melissa Etheridge, Zap Mama, Hugh Masekela, Vusi Mahlasela and the Winanas, amongst many others, and for the British Royal Family!

While Shabalala achieved incredible success as the founder and leader of Ladysmith Black Mambazo, his personal life was hit by tragedy. His brother and band member Headman Shabalala was murdered, his first wife Nellie of 30 years was shot and killed by an assailant, and then his brother Ben Shabalala, also a band member, was shot and killed while driving his two children to school.

@GovermentSA tweeted: “We would like to extend our condolences on the passing of Joseph Shabalala who was the founder of the group Ladysmith Black Mambazo. Ulale ngoxolo Tata ugqatso lwakho ulufezile.”

What: Joseph Shabalala from Ladysmith Black Mambazo has died