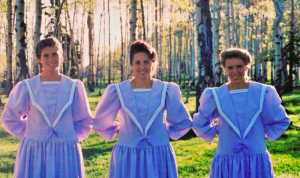 You can’t make this shit up. Seriously. Like, there’s an ultra-conservative religious cult called the FLDS Church, and they’re a kind of split-off from the Mormons with their main take-away being the polygamy thing. The community live in an isolated compound in Utah, where the young girls are married off to much older men – sometimes the child is 14 and the man is 85. The cult is run by a self-styled prophet with about 70 wives, and when he dies his son takes over, with his main business being to pimp under-age teenagers. The women have to wear long dresses in pastel shades, and braid their hair in French plaits. All of them sing badly.

Best – or worst – part: it’s all true. Keep Sweet: Pray and Obey takes a shallow dive into the murky waters of the FLDS Church, speaking to both current members and those who have left, in a bid to unravel what the community is about – and why they wear such weird dresses. This being a Netflix presentation, it’s not so much a serious documentary as a pseudo-earnest feature that aims for equal parts shock and entertainment. Although, to be fair, director Rachel Dretzin does drive a compelling narrative, and letting the FLDS members speak for themselves makes for a great script. It’s like Tiger King but with child brides.

Of course, the use of bible-speak and a folksy patriarchal philosophy to justify rape and under-age sex is extremely offensive, and  – spoiler alert – there is no real cathartic resolution of the whole mess, by the end. But watching it all unfold is strangely immersive. You also can’t help rooting for the ones who manage to get away – even though they still appear damaged by their experiences.

Watching Keep Sweet: Pray and Obey is a bit like guiltily gawking at a car crash – you’re grateful you’re not involved, you hope nobody is seriously harmed, but you still want to see a bit of gore, if possible. Which sounds awful, but then everything about the FLDS is pretty ghastly, so it makes sense.

What: Keep Sweet: Pray and Obey