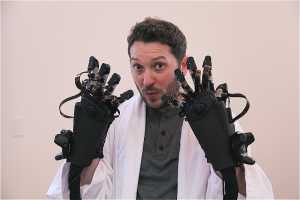 In Kevin McCloud’s Rough Guide to the Future, the presenter of Grand Designs sends a trio of comedians around the world to explore some key issues.

The new show will be broadcast on Sundays from 17 January 2021 at 7.30pm. This three-part series takes a unique look at some of the toughest challenges of our time and how advances in technology could offer a solution, from driverless cars that purport to save lives, to avatar robots that change the way we interact, and lab-grown meat which could challenge our approach to food and livestock.

Kevin McCloud is passionately optimistic about technology and the future, but British comedian Jon Richardson (pictured above), British-Malaysian stand-up comedian Phil Wang and British presenter Alice Levine have concerns about what lies in store for humankind. Kevin sends the three around the world to look at some of the biggest issues of our time and the tech that could offer solutions.

Seeking technological enlightenment Phil, Alice and Jon journey to three countries at the cutting edge of technological innovation: China, Japan and the USA.

But how open will the team be to embracing new ideas and technologies that may change the world for the better? Like most of us, each have concerns about what’s in store for humankind. But one man remains positive about technology and its role in our future, and that man is Kevin McCloud.

17 January: Jon Richardson in the USA

From bio-hacking to eco-friendly towns, driverless cars and revolutionary steps in food production, star of Channel 4’s 8 Out of 10 Cats, Jon heads to America, the crucible of modern capitalism, to discover ground-breaking technological advances.

Alice heads to Japan, the world leader in innovation, consumer electronics and robots. She’ll be investigating the weird and the wonderful, from AI and robot dogs, to robot funerals and café workers.

Journeying across China, a nation vying to be the next tech superpower, Phil, a regular on the BBC’s Would I Lie to You?, will discover revolutionary innovations in construction, gut-wrenching but ingenious food waste solutions, and ground-breaking farming techniques.

What: Kevin McCloud’s Rough Guide to the Future