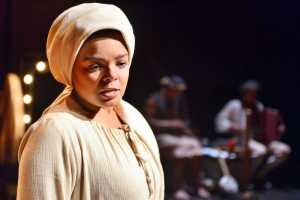 UPDATE: After the Krotoa Eva van de Kaap season was cut short in December 2021 due to pandemic-related circumstances, the season will resume from 23 to 26 February 2022.  Bianca Flanders will reprise her lead role opposite Geon Nel, while Frazer Barry and Riku Lätti will return as the musicians.

Krotoa Eva van de Kaap is a moving music theatre production that was first performed in The Netherlands in 2018. It enjoyed subsequent runs in Cape Town in 2019 followed by a few performances in the Free State.

Set in present day South Africa, a Dutch actor and singer and a South African actress (Bianca Flanders) meet on the film set of Krotoa Eva van de Kaap. He takes the role of Jan van Riebeeck, the VOC merchant commander who established a refreshment station at the Cape in 1652. She plays Krotoa, the young Khoe girl taken into Jan van Riebeeck’s household who, at a very young age, went on to become a key negotiator and translator between the Dutch and the local people. 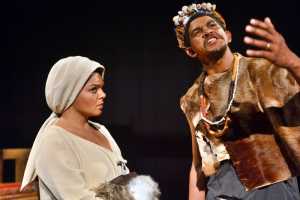 The first Khoe woman to be baptised and the first to marry a European (officially), Krotoa was physically and sexually abused and emotionally battered by the clash of two cultures. As the story plays out the two actors are not unscathed as they enter a whirlwind of confrontations. During their creative process and even in their own worlds, Krotoa’s story shakes them up. An inevitable dramatic conclusion is set in motion.

Krotoa is one of many projects the Netherlands Mission in South Africa supports that addresses neglected perspectives on a shared history. Through the theme of Transformation and Identity that promotes dialogue on historical and current transformation and identity challenges, the Netherlands Mission aims to stimulate difficult and uncomfortable conversations that need to be held before being able to move forward.

In this production Sylvia Vollenhoven picks up on the story that started three and a half centuries ago. Discussing the play, she says, “There are stories that seek to be transformed for the benefit of all and Krotoa’s story is one of those.” Krotoa Eva van de Kaap is a multilingual, perspective-changing, intercultural tribute to a shared history. It unfolds onstage in four languages: English, Afrikaans, Dutch and Khoekhoe, and surtitles are in English.”

The play is a collaboration between Het Volksoperahuis in The Netherlands in association with Artscape, and the production is supported by the Embassy of the Kingdom of the Netherlands in South Africa, the Performing Arts NL and DutchCulture.