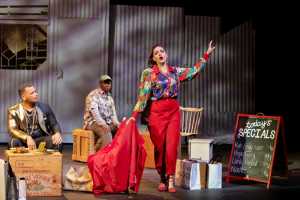 Like the bohemian characters of this opera, director Magdalene Minnaar has learnt how to do much with very little: as a touring production, her staging of La bohème was perforce reduced to the bare essentials, given serial transportation and diverse venues offering unknown and often dubious facilities.

Although it might be argued that an opera production’s priority should be the calibre of singing, no one could dispute the importance of set, costumes, lighting and props for the optimum presentation of the work performed.

With its four scene-changes and (as its title suggests) the necessity to convey a specific ambience, La bohème demands some ingenuity when bringing Puccini’s popular masterpiece to the boards, and Minnaar has risen nobly to the challenge. 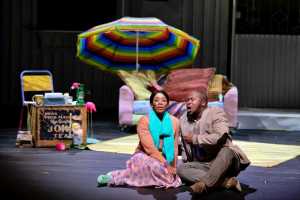 Strong portrayals from the quartet of leads

As she herself remarked, “the vivid characters of this opera are paramount”, so with strong portrayals from the quartet of leads, some deficiencies in physical staging may be forgiven.

Imaginatively transplanted into a dystopian South Africa of unspecified date, the Paris-based original fares remarkably well, generating both mirth and pathos. For instance, instead of the romance-promoting powercut of Act One being due to an empty meter, there is the all-too-familiar announcement, “Eskom regrets that…”

The downside is impaired credibility when at Christmas (in South Affica???) there are references to freezing cold, with lightly-clad vendors at the outdoor night market cheek by jowl with shivering, heavily muffled-up patrons.

Particularly successful are the comic interludes of Acts One and Four in which poverty-stricken men resort to puerile antics to allay their intense hunger and dire living conditions. While these are amusing, they also resonate poignantly with conditions in contemporary South Africa’s unequal society. Some things never change… 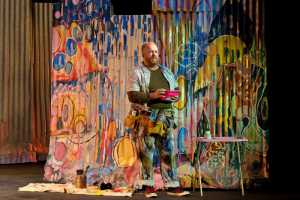 By contrast, his leading lady Zandile Mzazi is diffident – which suits the insecurity of her persona, Mimi. However, uneven projection results in the occasional drowning of her sweet soprano in the accompanying music of the small ensemble skillfully directed from the piano by Jeremy Silver.

Ané Pretorius, in superb voice, is a show stealer of eye-catching flamboyance as the feisty  Musetta, well paired with William Berger’s authoritative Marcello.

The integrity of this La bohème’s low-key staging complements the lushness of La rondine, performed earlier this month in the same venue. Together, they form a comprehensive tribute to Puccini from Cape Town Opera.