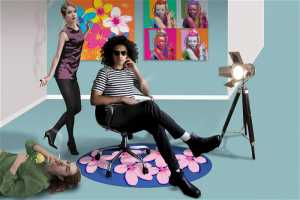 Whether staged traditionally to evoke the Belle Epoque or updated several decades to a more recent past, Illica and Giacosa’s libretto, and Puccini’s heart-rending music, retain undiminished power to move an audience. For this CTO production, director Matthew Wild has opted for the second alternative, placing his cast in a set of clean-lined austerity and artfully shifting the perspective of the plot from straightforward depiction to an elderly painter’s hazy, troubled recollections of long-lost youth in an arty milieu of the 1960s.

This has the effect of not only refreshing familiar material; it also enables the director to offer insights into aspects of La Bohème that are often overlooked in the raptures inspired by its music, insights that enrich one’s understanding of the narrative and its ironies. Chief of these is the anti-heroic nature of the protagonists, who with the exception of the heroine Mimi behave with the unedifying heedlessness of youth in their selfish pursuit of pleasure and career, indifferent to suffering until forced to confront the reality of death. This is all the more shocking as it befalls one of their twenty-something generation.

Another merit of this approach is its ability to neutralise, through its uncompromising clarity of vision, the tendency towards syrupy sentiment attendant on many a 19th century masterpiece: the contrast between the sweetness of melodies and bitterness of characterisation is piquant. Complementing Wild’s chosen interpretation is accompaniment from the CTPO under Jeremy Silver’s persuasive baton, the lyricism of the score well served but kept to an emotional level that allows singers to deliver their arias naturally within the context of the action. One obvious exception is the bravura piece from the glamorous Musetta in Act 2, an aria tackled fearlessly by soprano Brittany Smith to impressive effect.

Central to the plot is Mimi, portrayed with sensitivity by Sarah-Jane Brandon. Her gentle diffidence as she hovers on the periphery of her lover Rodolpho’s circle foreshadows the meekness with which she meets her end, intensifying its pathos; her rendition is equally soft though far from wanting in resonance, while her arias with Galeano Salas (Rodolpho) are achingly beautiful. Salas is that rare thing, a tenor with a rich voice underpinned by robustness, so that his projection leaves nothing to be desired. A highlight is his duet with Marcello (William Berger), whose sturdy baritone forms a delicious counterpoint to his register.

Introducing veteran vocalists Brad Liebl and Aviva Pelham to impersonate a Marcello and Musetta subdued by age, is another instance of Wild’s ingenuity in staging this La Bohème. Wheelchair-bound and succumbing to the fantasies of dementia, the aged Marcello becomes a metaphor of mortality, human as well as artistic. Pelham and Liebl provide an anchor to the production and give it structure.

With the visual impact of this opera enhanced by Kathrin Frosch’s functional set, Kobus Rossouw’s bold lighting and Louisa Talbot’s choreography, the only regret one might have is that CTO’s magnificent chorus is not afforded more of a pretext to be heard – but that is hardly the fault of this creative team.