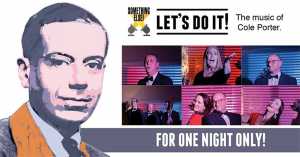 In today’s pop culture, where lyrics and music lean towards the sparse and atonal, Cole Porter still reigns supreme as America’s tune and lyrics master.

Many youngsters may never have heard the name Cole Porter, but few don’t know, sing or whistle his songs. Who hasn’t danced to Anything Goes, You’re the Top, Night and Day? Then there’s Let’s do It and Love for Sale? Or dreamt of tropical splendour listening to Begin the Beguine?

Now, at Milnerton Playhouse in Cape Town on 27 April, 2019, at 8pm for one performance only, Pierre Robertson and friends are presenting a freshly conceived trip down memory lane with Broadway classics by Cole Porter titled Let’s Let’s Do It! The Music of Cole Porter.

Duty bound to continue his brilliance

Over two hours, in recital form, Robertson, a Master in Chemistry, is adamant that he and his popular singers – Marius Steyn (bass), Chima Okafor (tenor), Melissa Sanderson (alto), Fiona Tanner (soprano) and himself as baritone/bass are not going to stand like statues pelting out Porter’s popular songs in operatic style.

“As Porter’s music/lyrics remain alive and relevant – even after nearly half a century – we are duty bound to continue his brilliance by devising a matching atmosphere for each song. To that end June Wells has come on board to block our moves. To our basic black outfits we add bits and bobs, and flip props around that highlight lyrics. In my latest hobby I’ve enjoyed plotting intelligent lighting plots with some newly purchased LED lights to aid me.”

A look of horror crossed Robertson’s face when I asked if his team were singing to backing tracks “Goodness! No! That would never do for Porter. His songs must be sung to live music. Chris Cameron-Dow is musical director and pianist. Adrian Gregory is on acoustic guitar, double bassist is Stephan Bezuidenhout and Joshua Klein is percussionist”

Robertson, a relative newcomer to our local musical scene, is bursting with enthusiasm for musical theatre. “I grew up more with church music and organ playing than drums and jazz.

Yet since I sang in G&S’s My Fair Lady a couple of years ago and again cast in their upcoming South Pacific, I live and dream music. That is in between my life in the world of chemistry and running, and with my partner our Modern & Tribal Curio shop in central Cape Town.”

Do trot over to Milnerton Playhouse on Saturday 27 April at 8pm.

What: Let’s Do It The Music of Cole Porter
Where: Milnerton Playhouse Cape Town
When: Saturday 27 April 2019, 8pm
Let’s Let’s Do It tickets: R120, www.quicket.co.za
WS