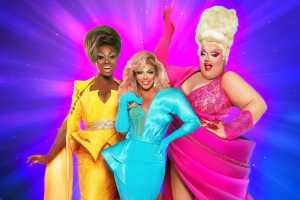 We’ve picked some of the top LGBTI shows on Showmax, ranging from series to documentaries to full length movies, and featuring a diverse cast ranging from drag queens to soldiers to hardcore cops and beyond.

In We’re Here, (pictured left), RuPaul’s Drag Race veterans Bob the Drag Queen, Eureka O’Hara and Shangela Laquifa Wadley inspire small-town residents from across America to step outside their comfort zones for a night of no-holds-barred drag – and a life-changing journey of self-discovery.

“HBO’s heartfelt We’re Here is the drag show America needs now,” says Salon. “If it sounds like Queer Eye, but make it drag and make it MAGA [Make America Great Again] states, well, it is. It also has a way of upending expectations that even the Fab Five never did… On a deeper level, it’s a show about loving – truly loving – your neighbor.”

At the 2020 Oscars, Pain and Glory was nominated for Best International Feature Film and Best Actor, a first-ever nod for Antonio Banderas (Desperado, The Skin I Live In). The Spanish drama also won 69 international awards, including Best Actor for Banderas and Best Soundtrack at Cannes, and was recently named the third best LGBTQIA+ movie of all-time by Rotten Tomatoes, where it has a 96% critics rating.

Written and directed by Oscar-winning auteur Pedro Almodóvar (Talk to Her), Pain and Glory centres on an ageing director (Banderas) as he reflects on the choices he’s made in life as the past and present come crashing down around him. Inspired by Almodóvar’s own life, Pain and Glory also stars Oscar winner Penélope Cruz (Vicky Cristina Barcelona, Volver) and multiple-award winners Asier Etxeandia, Julieta Serrano and Leonardo Sbaraglia.

Time Out says Pain and Glory is “Almodóvar at the peak of his powers”; New York Magazine bills it as “at once the gentlest and most emotionally naked movie Pedro Almodóvar has ever made;” and Rolling Stone proclaims, “Antonio Banderas gives the performance of his career… Pain and Glory, suffused with memory and regret, is one of Almodovar’s greatest films.”

Cate Blanchett and Rooney Mara were nominated for Best Actress and Best Supporting Actress respectively at the 2016 Oscars for their roles in Carol, a powerful drama about a married woman in 1950s New York, who risks everything when she embarks on a romance with a younger department store worker. Carol, which was also nominated for Oscars for Adapted Screenplay, Cinematography, Costume Design, and Score, won 79 awards worldwide and was recently named the fourth best LGBTQIA+ movie of all-time by Rotten Tomatoes, where it has a 94% critics rating.

Adapted from an autobiographical 2006 novel by André Carl van der Merwe, Moffie is set in South Africa, 1981, with the white minority government embroiled in a conflict on the southern Angolan border. Like all white boys over the age of 16, Nicholas Van der Swart (Kai Luke Brummer) must complete two years of compulsory military service to defend the Apartheid regime. The threat of communism and die swart gevaar is at an all-time high. But that’s not the only danger Nicholas faces. He must survive the brutality of the army – something that becomes even more difficult when a connection is sparked between him and a fellow recruit.

Since premiering at Venice in 2019, Moffie has been nominated for the 2021 BAFTA (British Academy Film Awards) for Outstanding Debut and won the Mermaid Award at Thessaloniki and the Film Critics Special Jury Prize at Dublin.

Set in the beautiful but bleak Cape Cod, Hightown follows Jackie Quiñones, a hard-partying, lesbian addict whose journey to sobriety is overshadowed by a murder investigation.

Filmed over five years in Kansas City, Transhood follows four kids – beginning at ages 4, 9, 12, and 15 – in a never-before-told chronicling of growing up transgender in the heartland of America. Directed by multi-award-winner Sharon Liese, the HBO documentary won the Audience Award at the 2020 AFI Docs Festival and has an 86% critics rating on Rotten Tomatoes, where it was recently listed as one of 40 Essential LGBTQ+ Documentaries.

Vida follows two very different Mexican-American sisters who return to their childhood neighbourhood after their mother’s death, only to discover they’ve inherited her bar and apartment – in a three-way split with her wife, who they didn’t know existed.

Vida has captivated the critics, earning a 100% critics rating on Rotten Tomatoes for all three seasons, where the Season 3 critics consensus reads, “A bittersweet farewell that’s entirely too short, Vida‘s final season is as messy, beautiful, and inspirational as life itself.” Vida was nominated for a 2021 GLAAD Media Award as Best Drama Series, earned fourth place on Time Magazine’s Best of 2019 list for Season 2, and won the Audience Award at SXSW 2018 for Season 1.

As AVClub says, “Vida is rightly lauded for its excellent performances, incisive writing, and commitment to centering queer, female and non-binary, and Latinx voices both in front of and behind the camera. But you know what? It’s also one of the best-looking shows on TV. The cinematography is top-tier. The direction is impeccable. It’s beautiful, immersive, often dreamlike filmmaking.”

What: LGBTI shows on Showmax

Lakutshon’ ilanga (When The Sun Sets)