When Luke Bond uses expressions like Richter Scale to explain the seismic changes from a normal week at Windsor Castle to a Royal Wedding week, you know you are about to make the acquaintance of someone who lives a very special life.

Bond will be in town to play the Poulenc Concerto for Organ with the Cape Town Philharmonic Orchestra on 21 November 2019, under the direction of principal guest conductor Bernhard Gueller. This is the penultimate concert of the CPO’s current season and includes the Symphony No. 5 by Tchaikovsky.

Bond is Assistant Director of Music at St George’s Chapel at Windsor Castle and there he accompanies or conducts the world-famous choir in eight choral services each week – often for a chapel filled with tourists. He is also organist at services of national and international significance, like the recent wedding of the Sussex Royals.

Naturally, all choristers and he himself have to return to Windsor in case of an emergency, so we hope nothing happens between now and this Thursday! For the Poulenc is going to be a great experience, a concerto he describes as  exciting and thrilling. It’s a piece “that expresses the real joy and the synthetic joy induced by drugs and alcohol misused by the composer, contrasted with darkness,” he says.

Bond is a friend of Deon Irish, who effected the introduction to the CPO. “Deon was visiting friends in the Midlands and they came to Warwick and he heard me practising on the cathedral organ. We kept in touch, and when I moved to Truro he came down to hear the beautiful 1887 cathedral organ there.”

Journey to being an organist

Although Bond was mad about the organ from the time he was two or three trying out his maternal grandmother’s piano and organ, he kept his options open and when preparing his A levels took courses that could lead to areas in science or other arts.  He had attended a school without an organ, wasn’t in the local cathedral choir, and didn’t really think being an organist would work for him, but friends along his journey opened doors and he won a scholarship to a cathedral school, had a gap year with organist Andrew Nethsingha and then attended Bristol University. He was soon on his way to “his dream job” at the Chapel of St George in Windsor Castle. 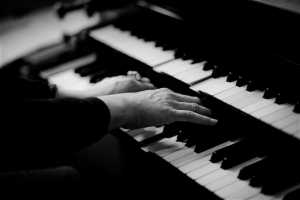 “I am so lucky to have this, through the kindness of people and, I suppose, knowing the right notes helped,” he says.

The Poulenc means much to him.

“I learned it for the first time for a Russian engagement but sadly the orchestra collapsed so this is my debut! It was commissioned in 1934 and premiered in 1938 and in the middle Poulenc had a breakdown, reconverted to the Catholic faith, and then wrote this piece in which one can sense more of the cloisters than the café of his previous concertos. This one is full of reflective moments; a journey from darkness through light and then neither at the end.  It is up to the listener to decide the mood after this range of the emotions. After this, you certainly don’t feel like putting your head in the oven like you do after his Dialogue of the Carmelites!”

Working at Windsor Castle is interesting, he says. “The chapel functions almost as it did when it was established in 1344 when the Order of the Garter was founded. Most of the time we just tick along, then suddenly there’s a Richter Scale spike like the one when Prince Harry married Meghan Markle. It was a remarkable event. No one can appreciate the weeks of planning, the television crews setting up and having the gardeners plant trees or shrubs to hide the power lines or other eyesores from the watchful eye of those millions, even billions, who tuned in. The security office provided 2 500 security passes in seven days. We had a lovely orchestra and the service was nice.“

What: CPO with Luke Bond organ and conductor Bernhard Gueller