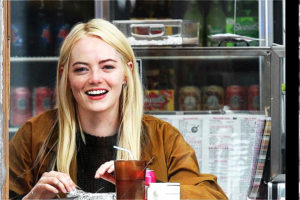 My SO said that if Wes Anderson and Terry Gilliam had a baby it would be Maniac. We have just finished watching this extraordinary, original, strange, funny and satisfying series and I think he is right. I loved it.

Set in the near future, in a New York that has robotised dog poop collectors and a new Statue of Extra Liberty, Maniac is the story of two complicated and disturbed strangers, Owen Milgrim (Jonah Hill) and Annie Langsberg (Emma Stone) whose lives collide when they sign up for a clinical drug trial with the hope that their problems and pain will disappear. Nothing goes as expected and the drug trial becomes more and more complicated as the AI computer gets emotional and goes off the rails, and the subjects are vulnerable while reliving various fantasies to come to terms with their lives. It’s complicated.

The performances, particularly but not exclusively, of Jonah Hill and Emma Stone are superb. They are amazing, both separately and together, and I was surprised by their range. A lot was asked of them and they switched style, emotion, period and emotion brilliantly. They threw themselves at the material with total commitment and because of this we believe everything.

I know I am hooked when I am able to suspend my disbelief and root for the characters. Owen Milgrim, a troubled and terrified young man, diagnosed with schizophrenia, is being bullied and victimised by his family. Annie Langsberg is a disaffected and angry young woman with a complicated and painful secret. The two end up at the Neberdine Pharmaceutical Company and, while being treated, we see into their heads. Somehow, they keep appearing in each other’s memories, fantasies and dreams. The sub plot involves the crazy medical team led by Doctor Mantleray (Justin Theroux), his mother (Sally Field) and Gertie the computer with feelings.

The styling is wonderful, with a retro-future feel. Old computers with lights, buttons and printouts merge with a 50’s and 70’s sensibility, but there are real and gritty near future elements too.

For me, it was the story that triumphed. It drew heavily on symbols and themes (sometimes as heavily as a big, funfair mallet) but each of the 10 episodes was fresh, funny, sad, strange and deeply original. I am sorry I finished the whole thing so quickly. I loved this whole new vision of our crazy world.

What: Maniac on Netflix