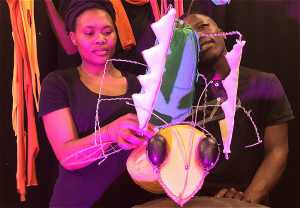 Jungle Theatre Company will be performing Mantis and the Bee in the September school holidays from 25 to 28 September 2019 at 3 Marchmont Road, Muizenberg.

Mantis and the Bee is based on a folktale of the San people.  It is a visual, musical and humorous exploration of /Xam mythology and the origin of life. Audiences will experience haunting music, dance, mysterious masks and the Khoikhoi language, in an action adventure into a world before the earth was created.

The piece ultimately asks – can we find a new way of being human among the embers of our indigenous cultures? 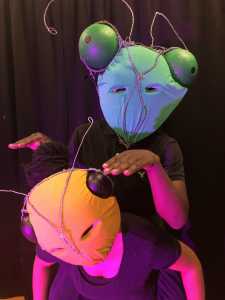 Mantis and the Bee was created collaboratively by Jungle Theatre Company during the first half of 2019. They play is written and directed by Joce Engelbrecht, masks and puppets were designed by Kai Goertz, costumes by Eva Adams Hart and Donald Barnett, music composed by Gershan Lombard and it is performed by Zizipho Gcasamba, Monray Davids and Siya Badi.

The September holiday programme will take place from 2 to 4pm each day. The performance, which is 45 minutes in duration, will be followed by a 45-minute interactive workshop. During the workshop those who have seen the show will be given an opportunity to share their interpretation of the characters and the story. The event is most suitable for ages 8 and up.

What: Mantis and the Bee