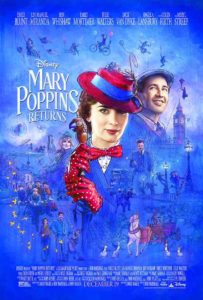 Mary Poppins Returns, a sequel to the 1964 film, is bright, sparkly, fun and a nostalgic feel-good blast for fans of the original. While it follows a similar pattern to the first film with its colourfully animated song and dance sequences it also tells its own story.

The children from the first film, Michael and Jane Banks, are now all grown up and Mary Poppins (Emily Blunt) flies in on the string of a kite to again look after the Banks children – this time Michael’s (Ben Whishaw) offspring.

It is set somewhere in the 1930s, so we have motorcars that drive by slowly, instead of horses and carriages; guys who light the gas lamps instead of tap dancing chimney sweeps, and old Mrs Banks’ suffrage has now morphed into young Miss Jane Banks’ (Emily Mortimer) organising labourers.

While Michael and Jane try to figure out how to get the family out of financial difficulty, Mary Poppins sees to the children, opening their eyes to a world of wonder with the help of the now grown-up Jack (Lin-Manuel Miranda).

Remember Jack the chimney sweep from the original Mary Poppins movie? He pops up, as do all sorts of familiar characters. Dick van Dyk is not the only one who makes a cameo and even the cartoon characters in some of the sequences will have you wondering what Disney programme you saw them in first.

There is a huge dollop of nostalgia attached to the enjoyment of Mary Poppins Returns. There are plenty of jokes to catch if you are familiar with the original material. Everything about the film references the old one, from the letterings of the credit sequences to the hand-drawn animation (yes, there are penguins), to the costumes and colour palette and it all adds to the magic.

Emily Blunt makes for a wonderfully sassy Mary Poppins, channelling her inner Julie Andrews while still making the role her own. She shows off her singing and dancing skills while also demonstrating her subtlety as an actor. Ben Whishaw nails dishevelled, distraught, recently widowed father; Emily Mortimer is suitably supportive and Lin-Manual Miranda is note-perfect.

The three children are cute and the CGI and animation is seamless. The score reference the original, but the songs are brand new and hummable.

While the story feels familiar, this family film is solid and effective. Parents will wallow in the nostalgia and laugh at the jokes, children will empathise with the Banks kids and catch the lessons embedded in the songs. It’s Disney – this is how it works and this film works.