OLEANDER CAIRNS witnessed a masterful Metamorphosis at the National Arts Festival and was (appropriately) transformed: 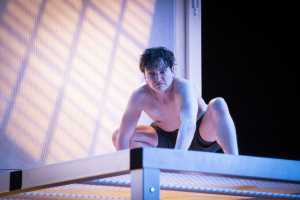 As a festivalgoer emerged one morning from uneasy dreams of attending dull shows, she found herself transformed in her seat into a gigantic enthusiast. Kafka’s The Metamorphosis has been performed so many times that I wasn’t sure what else this rendition could add, but my doubts were squashed as swiftly as an insect beneath a boot.

Metamorphosis was directed by Alby Michaels and conceptualised by some 300 students from the University of Johannesburg’s Faculty of Art, Design and Architecture: a collaborative feat in itself. The chiming music could have been part of a Tim Burton soundtrack, and this, coupled with the actors’ jerky movements, made the production seem a puppet show, a doll’s house, a stop-frame animation, a clockwork dream.

The set design deserves special mention. The primary set piece was an enormous white chair (one side of which was a screen), which was used to great effect throughout. This allowed for beautiful, inventive acrobatics, as well as powerful use of silhouettes. The giant chair was a replica (in everything but size) of the three other chairs used by Mr Samsa, Mrs Samsa, and Grete (Gregor’s sister), which added to the Alice in Wonderland-type fantasy of the work.

Craig Morris should be congratulated not only for his wicked portrayal of Mr Samsa, but also for his masterful work as choreographer. The timing was comic in the extreme, and the aspects of physical theatre in the work were particularly good at communicating the weightiness of family responsibilities. William Harding, styled to look like a cross between Edward Scissorhands and a young Salvador Dali, made a deeply sympathetic Gregor Samsa. He embodied his role as insect in a most captivating way. Khutjo Green and Ameera Patel, who played Mrs Samsa and Grete respectively, completed this quartet of excellent actors. 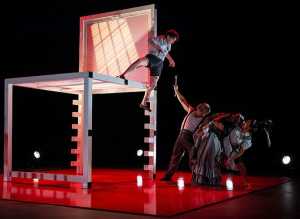 The realities of many modern lives

Though it was hardly the main point, the interactions between the four characters emphasised the unfair and often ridiculous divisions of labour in families. Moreover, Metamorphosis also addressed the realities of many modern lives: the misery of virtually endless work and travel, the inability to take sick leave when one needs to, and the terrifying authority of one’s bosses. The Chief Clerk in question was represented by a huge, bushy-eyebrowed face projected onto the screen, who spoke in a booming voiceover with an Afrikaans accent: a small nod to local contexts and historical power relations. The play also emphasised the horror of understanding but not being understood, and thus being alienated from those we love. The show ended on note that was both mundanely domestic and entirely sinister.

This was one of my highlights of the NAF 2019. Luckily for patrons in Gauteng, Metamorphosis will show at the UJ Arts Centre Theatre. I hope the theatre-makers will consider touring further afield in coming months. 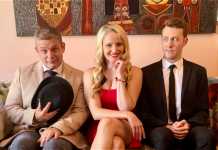