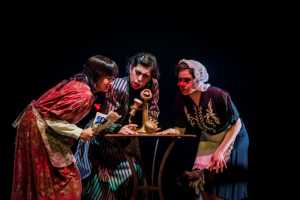 MEPHISTO. Psychological drama by Klaus Mann. Adapted by Ariane Mnouchkine. Directed by Christopher Weare. Design/lighting by Niall Griffin. Presented by LAMTA at Theatre on the Bay.

Down the centuries history records that, during similar circumstances, previously unknown political parties surface, promising wondrous solutions to their country’s ills.  For Germany’s 1933 democratic election seeking power were the Communist Party, Social Democrats, the Catholic Party and the National Socialist party (Nazi party). Led by Austrian-born (in)famous orator Adolph Hitler, the Nazis promise to revive Germany’s world status and restore its pride after the humiliating signing of the 1919 Treaty of Versailles.

Economic and political uncertainty tends either to bring out the best in people or the worst. Mephisto’s worst character is small town actor Hendrik Hofgen (Miguel de Sampaio) whose inflated ego allows him to declare: “I am absolutely indispensable. The theatre needs me.” When offered the lead of Mephisto in Goethe’s Faust he turns his back on his Hamburg Pepper-Mill cabaret friends, and moves to Berlin where, figuratively, he sells his soul to the Nazis in order to further his own career … 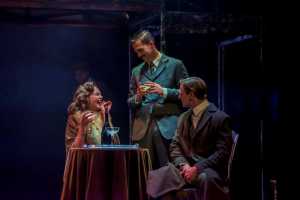 Dining with the devil

Hofgen is a theatrical profile of the real life Gustav Grundgen who, motivated by personal ambition, went along with Nazi policies. Grundgen, a one-time friend of Mann, did actually became a highly influential theatre director under the Nazis but, as the saying goes, “when you dine with the devil you become the devil.”

Superbly directed by Emeritus Professor Christopher Weare, Mephisto is told over twenty-one fast moving scenes by LAMTA actors with guest artist Matthew Dylan Roberts starring as Thomas Brucker.  Dressed in period costume, hairstyles included, I must commend each and every thespian for the manner in which they portrayed their portraits, spoke in character, never missed a cue or allowed their own personalities to creep through during lengthy soliloquies.

Over an interval-free two hours Mephisto is both an emotionally draining tale to tell as it is to watch. Nevertheless I recommend buying a ticket for the remaining performances.