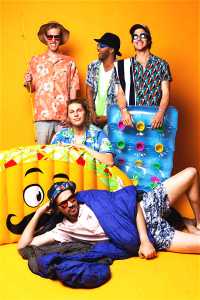 Money For Bali is one of the most energetic and yet easy going outfits to hit the South African music scene. This month they are planning to raise the roof with their live launch event in celebration of their latest single, Eyes Like Fire. This catchy new house track was created from the group’s inspiration of the rhythm and feel of the genre and serves as testament to their love for South African house music.

“The title of the song describes the feeling of locking eyes with your partner on the dance floor and literally burning up inside. You know when your heart does that little ‘flutter!’ kind of palpitation”, explains front-man, Stefan Botha on the meaning behind their new single. He also comments that, “listeners would definitely be met with a bit of a pleasant surprise as the track is something completely different from what we have released before. For those who are hearing us for the first time, we hope that the track catches their interest and motivates them to investigate our music.”

In recent months, Money for Bali have rolled into the year reggae style and have hit the sweet spots with their new releases so far in 2019. Their previous single No Milk has been added to some notable radio playlists and is currently climbing its way up on MFM’s Top 40 chart.

They’ve also further celebrated their new music with a well-received performance at this year’s esteemed Up The Creek Festival. But it hasn’t stopped there. A new song called Student life made its way into fans’ eardrums, accompanied by a kick-ass live performance video:

Money for Bali is a five piece band from the Mother City, Cape Town. The band first started when Stefan Botha and Nick Enslin met whilst studying molecular biology. They soon became friends and started jamming. Soon after that they reached out to their mutual friend Tim Welsh, due to his formal music education, in order to develop their creativity and musicality. This lead to the formation of the Money for Bali trio. Tim then approached bassist Stephen de Souza and drummer Ray Morgan, his two friends from the UCT music college, with the proposition of a five piece band. They released their debut EP called Sex, Wax and Salty Cracks in May 2016.

What, where and when: Catch the exclusive live performance of the new single by Money for Bali on 29 March 2019 at The Raptor Room in Cape Town