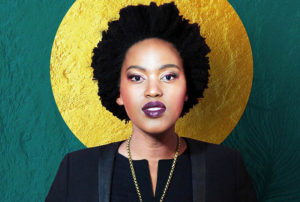 “Music only demanded my full attention in 2013,” says singer-songwriter Msaki, “but it was always there. Listening to protest story-tellers Nina Simone, Pete Gabriel and Miriam Makeba along with Phil Collins, Brenda and the Big Dudes and Genesis was part of my rite of passage as my father drove me to and from home in Peddie to boarding school in Grahamstown/Makhanda.”

Msaki is the soloist in Three African Songs, orchestrated by Cape Town award-winning composer Hendrik Hofmeyr.  They are on the programme with the 90 musicians of the Bundesjugendorchester (BJO) or Germany’s national youth orchestra, presented by the Cape Town Philharmonic Orchestra and Miagi, in the opening concert of the Cape Town Philharmonic Orchestra’s new symphony season on 15 August 2019 at the Cape Town City Hall. This concert, under the direction of Canada’s National Arts Centre Orchestra music director Alexander Shelley is part of the BJO’s 50th anniversary tour of South Africa.  Also on the programme are Brahms, Walton and Gershwin.

The programme comes to South Africa directly after a triumph in Berlin on 3 August 3 2019, where Msaki was sensational.

Getting into music and art

“My father was into folk,” she continues, “along with Elvis, UK pop and collecting vinyl, so I had a very formative albeit eclectic foundation.  What he taught me extended to my life’s choices. I was always creative but because no one seemed to make a prestigious career or even good livelihood in art I decided to follow in his footsteps and study law. I knew art would always be there and I could do it as a hobby. ”

At the Nelson Mandela University someone heard Msaki singing in the shower and the next thing she knew was that she was singing in the freshers’ concert, and then in the school jazz band. Her gift was being exposed.

“In the same space I was exploring other options … I started assisting with decoration at house dances and balls. At the end of the year I made an art portfolio and moved to the art campus.  With no support for this from my parents, I supported myself via a hockey scholarship  – I played for Eastern Province. Then I moved home because playing hockey combined with being a full-time student and waitress was exhausting. I found work as a graphic designer and my parents then offered to support me through a Fine Arts degree at Rhodes.  I was still thinking academically, but I was being asked to write more and more original songs.” 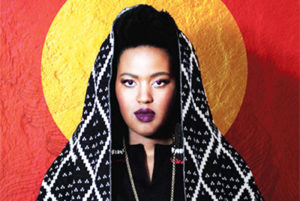 Msaki went to Leeds University in the UK on an exchange and met Richard Ormrod, whose father established a club in London for expatriate South African musicians. There she found her home amongst musicians like Winston Mankunku. She also had a band in Leeds and when she returned to South Africa she was more confident about her performance abilities.

“I struggled to figure out how music feeds the visual side, and began to curate performance art with sound installations. I sort of dropped out of art and design to become a musician,” she explains.

“Working with Hendrik Hofmeyr on Three African Songs is incredible,” says Msaki. “Hendrik is a genius. He has created a marriage of Miriam Makeba’s trance-like way of singing with full orchestra.  I am really nervous about singing them! Since I am not classical trained, I love to hear the difference between her simple songs and his thinking.”

Hofmeyr and conductor Alexander Shelley will be interviewed by Rodney Trudgeon before the concert at 7.15pm. The talk will be open to ticket holders. The dress rehearsal will not be open.